Posted on 6 October 2021 by Matthew Liebenberg 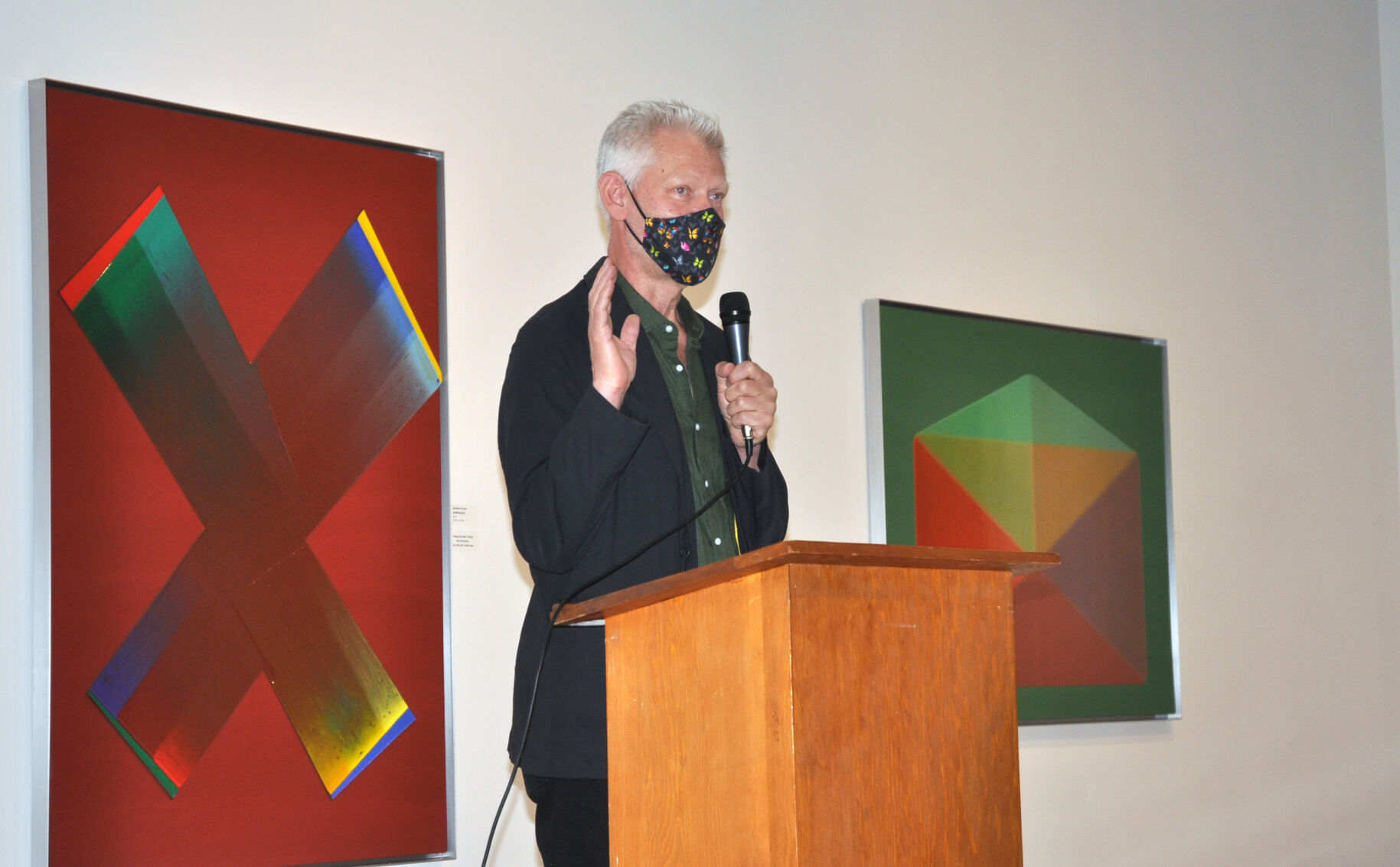 Abstract painter Jonathan Forrest speaks during the reception with the artist hosted by the Art Gallery of Swift Current, Sept. 17.

An enthusiasm for abstract painting, which started when Jonathan Forrest was an art student in Saskatoon during the 1980s, continues to be an inspiration for new approaches to artmaking.

A survey exhibition of his work is currently showing at the Art Gallery of Swift Current. It features a selection of large paintings dating from 2002 to 2019 as well as a wall of 13 smaller paintings covering the period 1985 to 2017.

It is the first time this body of work is shown together in an exhibition and it is also scheduled for a future show at the Moose Jaw Museum and Art Gallery. He will usually do a show of his recent works, which makes this exhibition different.

“This is the first time really that I had a chance to look back and had a sort of survey of a range of dates,” he said.

The exhibition title, One Thing Leads to Another, reflects his artmaking process over the years that made it possible to explore different directions.

Forrest was born in Edinburgh, Scotland, and he came to Saskatoon as a teenager in the late 1970s. He studied at the University of Saskatchewan, where he received a Bachelor of Fine Arts in 1983 and a Master of Fine Arts in 1991.

“A lot of interest I have in painting sort of comes from the coincidence of where I ended up living and who I ended up studying with,” he said.

There was a vibrant painting community in Saskatoon and abstract painting was part of that tradition, but by the early 1980s many of those artists were moving on to other things.

“Even as I became immersed in painting, most of my peers were interested in exploring other possibilities in art, but there was something in painting that suited me,” he said. “Painting is very much my inclination. Making something with my hands, being alone in the studio, tapping into some non-verbal expression or intuition perfectly suited my personality. And the fact that painting was being pushed to the margins, well that only made it more attractive to me.”

He studied with a number of artists, but the second- and third-year painting classes presented by abstract painter Robert Christie was a crucial influence.

“The ideas and possibilities discussed in these classes formed the basis on which I build my career,” Forrest said. “But more importantly, Bob’s support, mentoring and friendship over the years served as a rock that has helped me through the rollercoaster ride of the last four decades.”

He attended his first Emma Lake Artists’ Workshop in 1985, and thereafter returned several times over a 25-year period. The last one he attended was in 2012, and these workshops assisted his development as a painter.

“As a young painter it was thrilling to spend two weeks working side by side with such a range of artists who learned by doing, by making something, trying it out for size,” he recalled. “My experience was more like an apprenticeship, learning a craft through making and many of the pieces in the show were painted at various workshops.”

He lived for many years in Saskatoon and set up studios in various locations in the city, but about 15 years ago he purchased an old church about an hour east of Saskatoon in the small community of Carmel to use as a summer studio.

He moved to Vancouver Island about eight years ago, but still returns to Saskatchewan every year during the summer to spend time at his studio on the prairies.

All the paintings in this exhibition are in his personal possession, and the process of selecting works was an opportunity to reflect on his career. He realized how important those early days in Saskatoon during the 1980s and early 1990s were to his career.

“From looking back now at those times, I can actually see what a unique and exciting time it was,” he said.

The paintings in the exhibition represent various aspects of his development as an artist. He was already experimenting with a combination of different materials in a painting created at an Emma Lake Artists’ Workshop in 1985.

“Even at this early stage I had this impulse to do things to open up some creative space, to use the materials to get away from myself, away from what I could consciously think of by using unorthodox materials that wouldn’t last, might not even stick to the surface,” he said. “I thought there was nothing to lose and it gave me this great mental freedom.”

Other paintings in the exhibition highlight his use of vibrant colours and contrasting texture, or his change of direction to try something different.

“It’s sort of a habit I have of a pendulum swing of trying opposites in terms of colour to geometry,” he said.

A more recent painting from 2018 was the result of feedback he received from other artists, which motivated him to take another look at the work and continue with it. The painting is therefore aptly titled Second Look.

“There’s this misconception that you make art in a vacuum,” he said. “But there’s so many outside factors that nudge and prod you â€” fellow artists, other art you see, the environment you live in, the environment you work in, your mood, your past. It all gets into the work.”

He wants people to look at his art, but he does not think about how people should look at his paintings while he works in his studio.

This need to remain enthusiastic about his work serves as a motivation to remain open to different approaches of artmaking.

“Ninety percent of the time it’s me alone in the studio working, and I got to keep myself interested,” he said. “So I keep pushing the paintings as far as they will go and when I sort of feel like I’ve said what I can say, it just get boring and then I go through a kind of tear up the plan and see what else I can come up with.”

He describes his creative process as positive, because he is making something and then offering it to people to experience.

“The fun part of painting is trying new things and coming up with new things,” he said. “It’s like looking for the surprise and it’s about looking for surprise for yourself, and if you’re surprised, hopefully other people looking at the work will get that kind of kick out of it.”

This exhibition by Jonathan Forrest will be on display at the Art Gallery of Swift Current until Oct. 30. Admission is free, and gallery hours are Monday to Wednesday noon to 5 p.m., Thursday noon to 7 p.m., Friday and Saturday noon to 5 p.m.

Abstract painter Jonathan Forrest speaks during the reception with the artist hosted by the Art Gallery of Swift Current, Sept. 17.