Posted on 1 September 2021 by Ryan Dahlman 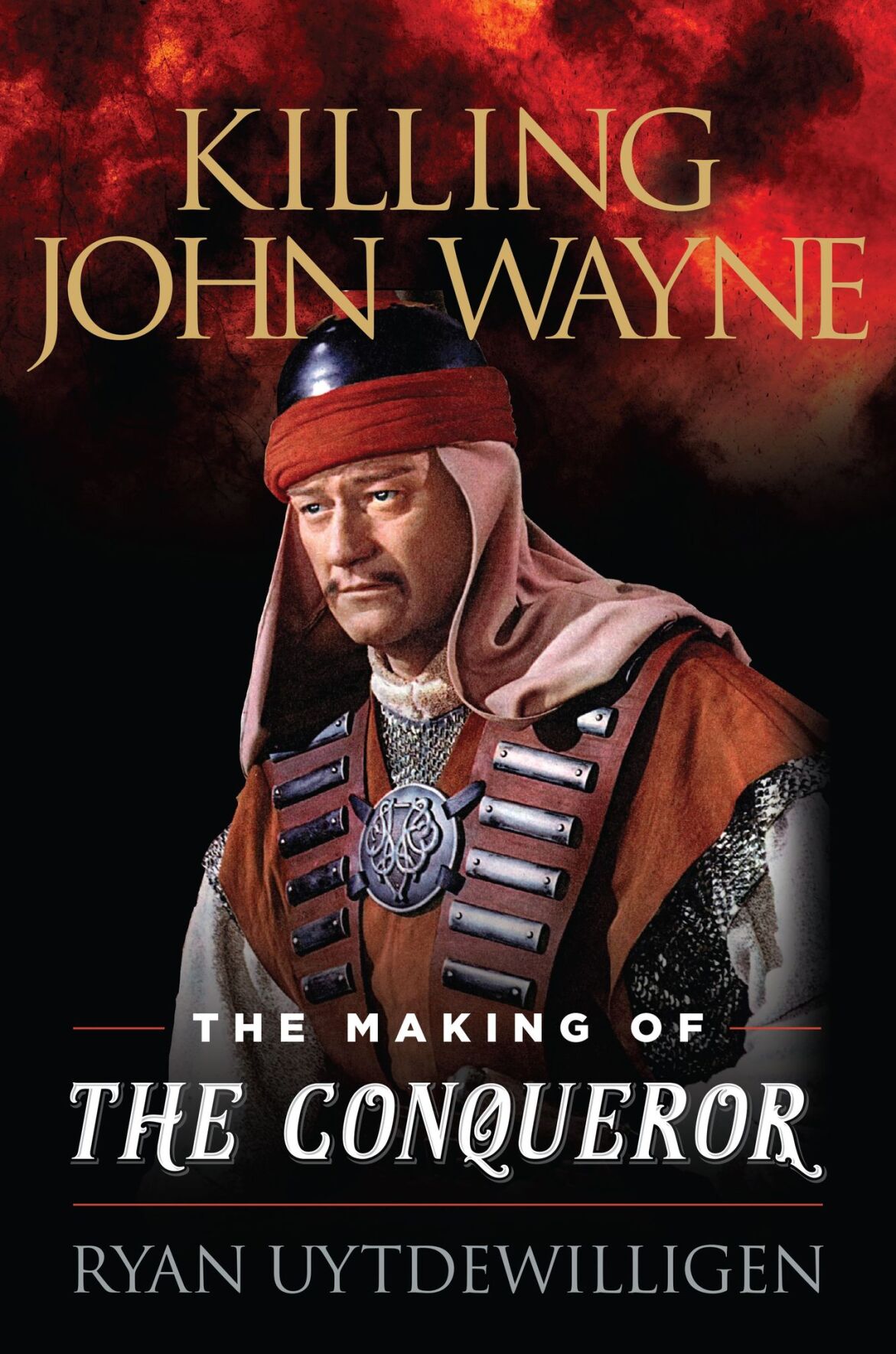 When Coaldale native Ryan Uytdewilligen began his writing career he probably didn’t expect he would be writing about an American movie icon John Wayne and how awful in every respect, his final movie would be as well as unearthing some disconcerting facts about Wayne himself.

In the aptly titled Killing John Wayne, The Making of The Conqueror, Uytdewilligen examines old articles and pieces together some of his own interviews with people close to the movie to look at the movie The Conquerer where Wayne is grossly miscast as Temujin/Genghis Khan a 13th century Mongol warlord. The movie is produced by billionaire Howard Hughes whose exploits are well documented.

The more Uytdewilligen learned of this movie, the more fascinating it became.

Doesn’t sound like the type of movie that a westerns and war hero type of character Wayne would be involved in. It gets worse as many of the outdoor scenes were shot in St. George, Utah in 1954. This was somewhat close to where nuclear weapons has been tested and a significant number of crew members developed cancer. Uytdewilligen had friends of friends in the industry who told him these stories about the seemingly cursed $6 million movie, which in 1954, was a lot of money.

“I have a friend of a friend of a friend tells you this rumour and the little tidbit where they did this film near where they films this movie near a nuclear test site and everyone died and it’s kind of startling fact and for a couple of years myself thinking about it more and more and more and more research, and then eventually back in 2018, I just thought, this needs to be a book,” explains the Coaldale native of Killing John Wayne. “I have more information than anyone I know after doing all this reading and compiling, and then it just seemed like the perfect timing because it’s not just a book about one movie at that moment. It was when North Korea was doing a lot more nuclear tests and they were doing this doomsday clock. This story also encompasses a lot of the #METOO movement and a lot of the use of yellow face makeup, you know, changing your skin colour to play another race. It just seems like there’s so many different topics that were important in this book. There’s no better time than telling this crazy story now. My obsession continued to expand and it also involved Howard Hughes and anytime I can talk about or research Howard Hughes I’m a happy man.”

There was a lot of work done in getting

“I was writing the book as (commentators) rediscovered this old Playboy interview he did in 1971 and had a lot of unflattering racist remarks to the point where they are in the process of taking his name off of John Wayne Airport (Orange County California) and so that really altered, at least for some, his legacy,” he recalls. “There are so many books about Howard Hughes, John Wayne, there’s a lot. I tried to read as much as I could get my hands on, always this movie The Conquerer was named as a footnote or a small chapter but it was mentioned in every single one. That was the joy of it was piecing it all together. I would read a book you would find a different perspective or knowing what I learned through the research. You would recognize what this person was doing during this timeâ€¦ it was a mystery in filling in the blanks. It is definitely an unflattering story. If you dig deep enough, there are a lot of unflattering stories that deflate these legends. This is what this book is ultimately about: John Wayne and Howard Hughes, these two titans and their egos led them to this disaster.”

Wayne was a massive box office draw, but wanted to win an Academy Award and be recognized as a serious actor. He ended up taking projects that steered himself away from being the typical typecast war/cowboy hero.

Unfortunately for Wayne, he picked a project that was such an unrealistic stretch, it was not a good way to wind down his movie career. For all of the money spent, it was a poorly done. Uytdewilligen noted that it was bad because those working in it were trying to make a serious movie, but the results were laughable.

A film aficionado, Uytdewilligen says The Conqueror isn’t the worst film he has ever seen as it is entertaining because it is so bad it is comedic, but it is definitely up there as far worst overall quality films.

“There are way worse moves today in the sense of unwatchable, because there’s no love or passion or creativity they are just doing it to make something so it is unwatchable in that way,” Uytdewilligen says.   “But The Conqueror you can see that no one (while doing it) is thinking they are making a bad movie and that’s what makes those types of movies more endearing. Very cringeworthy dialogue, John Wayne in his make-up, the strange plot in general. But it is a still a big budget movie and it look more gorgeous than most movies today because it was filmed on location and hundreds and hundreds of extras. Everyone gave it there all…it’s a bad movie but it’s is an entertaining bad movie.”

Uytdewilligen says there are so many unknown or little talked about facts about the movie star. For example, Wayne took an over-the-counter amphetamine called dexedrine which was supposed to suppress appetite, would make him more awake and helped give him his hulking and muscular physique even as he was much older. He developed a dependency on the drug. He was also a chainsmoker.

“His opinions on things too, this book talks a lot about the changing landscape in Hollywood. The Conquerer was the the beginning domino that ended the studio system. A lot of this book is John Wayne’s reaction in trying to fit into the new mold of Hollywood and being very bitter about it,” explains Uytdewilligen. “Ultimately, it is a very unflattering book about him.”

Uytdewilligen noted that Wayne’s close family would not talk to him for the book, but many who were effected by Wayne and the movie did speak to the Coaldale author. He said the people were there, lived there and were effected by the nuclear testing as well seemed to be willing to discuss because they wanted to get the word out about the area. Wayne himself developed cancer.

People interested can order the audio book or hardcover through their favourite actual or online bookstore.