Posted on 16 June 2021 by Matthew Liebenberg 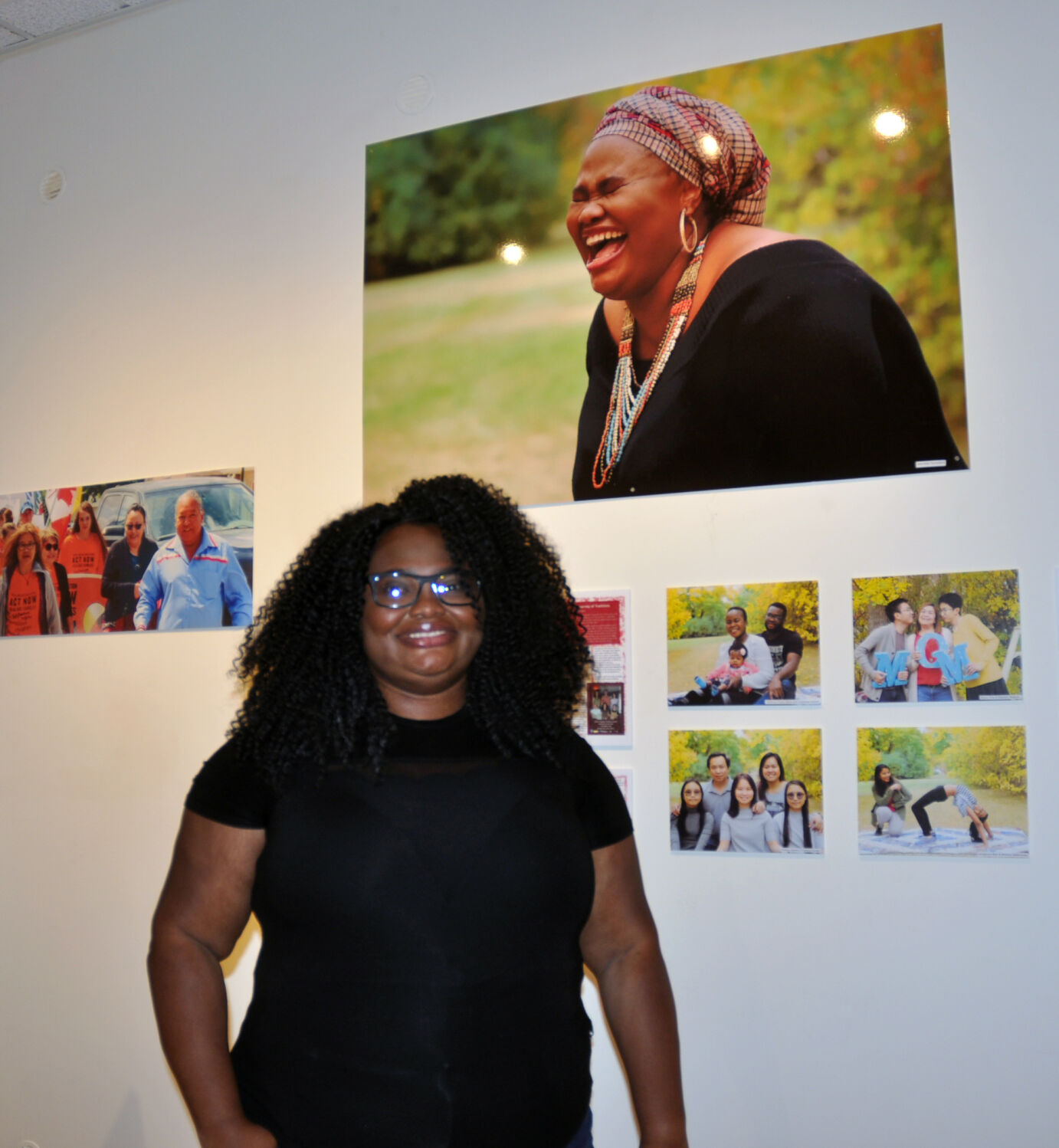 Jane Ibisiki Tamunobere stands with the large photo of her in the new exhibition at the Swift Current Museum.

Newcomers have always been an integral part of the growth and development of Swift Current since the community’s founding in the late 19th century during the construction of the Canadian Pacific Railway line across the prairies.

The Swift Current Museum’s new exhibition, Newcomers Then and Now, highlights the contribution of newcomers towards the community’s diversity since the early days and the commonalities between those arriving now and their predecessors in previous decades.

Stephanie Kaduck, the Swift Current Museum’s education and public programs coordinator, believes it is an important story to tell.

“It’s an exhibition that’s important to see that settlers and newcomers are all newcomers,” she said. “That other than our indigenous people, everybody else who’s come here are newcomers and that it’s also very interesting how early on we had people of different races and cultures living in Swift Current and region.”

The early residents were mostly from England and the Henderson’s Directory for 1904, which is a list of addresses for inhabitants and businesses, indicated names with a British heritage and only one French name. The 1905 directory included an East Asian name, with Lee Chong listed as owner of a restaurant and laundry.

By 1914 there were 14 Chinese restaurants and laundries in Swift Current. The exhibition includes details about one of the city’s well-known citizens of Chinese heritage, Lee Lam. He came to the city in 1927 and operated various businesses over the years, including a restaurant, grocery store and market garden. He passed away in 2000 at the age of 101, and the familiar Lee Lam bridge across the Swift Current Creek next to Riverside Park is named after him.

Mennonites settled in the Swift Current area during the early 1900s and some inhabitants considered these newcomers in a negative way, but local businesses welcomed their patronage.

“The term they used for the prevailing attitude is nativism,” she said. “You see it all over in the earlier newspapers right up to World War Two that white Anglo-Saxon Protestants were the height of civilization and everybody was else was lower on the scale and were treated accordingly.”

Newcomers from other parts of the world also came to Swift Current and area during the initial decades of the 20th century, including from Greece, Lebanon, and Syria. There was a small Jewish community in the city and the owner of the first store on the south side, Plotkin’s Grocery Store, was from Russian-Jewish descent. Men from the neighbourhood met at the store to talk and smoke.

“The fact that Englishmen, Italian, American, Jew, Ukrainian, and Pole could find common ground made Plotkin’s a kind of cosmopolitan meeting place that helped those folk to understand one another,” she said.

The exhibition provides details about other newcomers over the years that included Japanese, German, Ukranian, and Russian immigrants, as well as the establishment of Hutterite colonies in the area.

Residents with African ancestry have been living in Swift Current since the first decade of the 20th century, and Kaduck discovered new details about Black residents during the preparation of the exhibition, when she looked closely at a group photo from 1907 of students in front of the first Central School.

This school was located on the site of the current Great Plains College, and among the school children in this historic photograph are several Black students.

“This was a fascinating discovery,” she said. “There weren’t many African-Americans in Swift Current, but as early as 1910 there was a downstairs restaurant on Central Avenue and there was a young man who run a shoeshine stand in the Healy barber shop.”

The arrival of newcomers to the city in the second half of the 20th century included individuals and families from Vietnam, Chile, and more recently from the Philippines. The list of recent newcomers to the city that were assisted by the Southwest Newcomer Welcome Centre includes a multitude of countries.

The Swift Current Museum created this exhibition in partnership with the Southwest Newcomer Welcome Centre.

One of the featured photos in the exhibition is of Jane Ibisiki Tamunobere, who came to Canada in 2011 as a student to study at the University of Saskatchewan. She has been living and working in Swift Current for two years, and she serves on the Southwest Newcomer Welcome Centre board of directors.

“Swift Current has made me feel accepted and welcomed and settled, and I am grateful for the opportunity to be able to do that and I hope that in the years to come the acceptance of immigrants into different workforce around the city, around the provinces, and around Canada will continue,” she said.

She is currently in Canada on a work permit, but she will soon become a permanent resident and then plans to continue her studies by doing a masters degree in social work.

Her experience as a newcomer and a member of a visible minority in Canada has not always been easy, and she believes there is still a lot of misconception about immigrants and immigrant life.

“Being a visible minority has its own struggles, and one thing I have learned over the years is I don’t look into the outward part of who I am, but I look into what I have to offer,” she said. “So if I go for maybe a job interview and people tend to look at me for what my outward appearance gives them, then it’s their loss, because deep inside me I have more to offer to a job or anywhere I am or any place I find myself.”

Tamunobere hopes people will come to the exhibition to discover more about newcomers from the past and present. She feels it will be beneficial to everyone, from students to employers and residents to learn more about the many people who have contributed to the building of this diverse community.

“This exhibition for me is beautiful,” she said. “It gives me the value of inclusivity. Being a Black person in Canada it gets really hard to find a community where you are accepted, where your culture and your own values are being appreciated, but seeing this exhibition in Swift Current I feel so welcomed, I feel involved, I feel like everybody should come in here and see these and understand what it means to be an immigrant.”

She noted that newcomers are coming to Canada to start life from scratch, which can be very challenging.

“Some of us come without family members, some of us come here and leave our families back home and then they have to join us four, five years later, or some of us come for school as teenagers or as young adults and then Canada becomes home,” she said. “So seeing this is so innovative and educational, and this is so thoughtful of the Swift Current Museum to do this.”

The exhibition Newcomers Then and Now will be open until Labour Day. Admission to the Swift Current Museum is free. The museum is open Monday to Friday from 9 a.m. to 5 p.m., and on Saturdays from 1-5 p.m.

Jane Ibisiki Tamunobere stands with the large photo of her in the new exhibition at the Swift Current Museum.