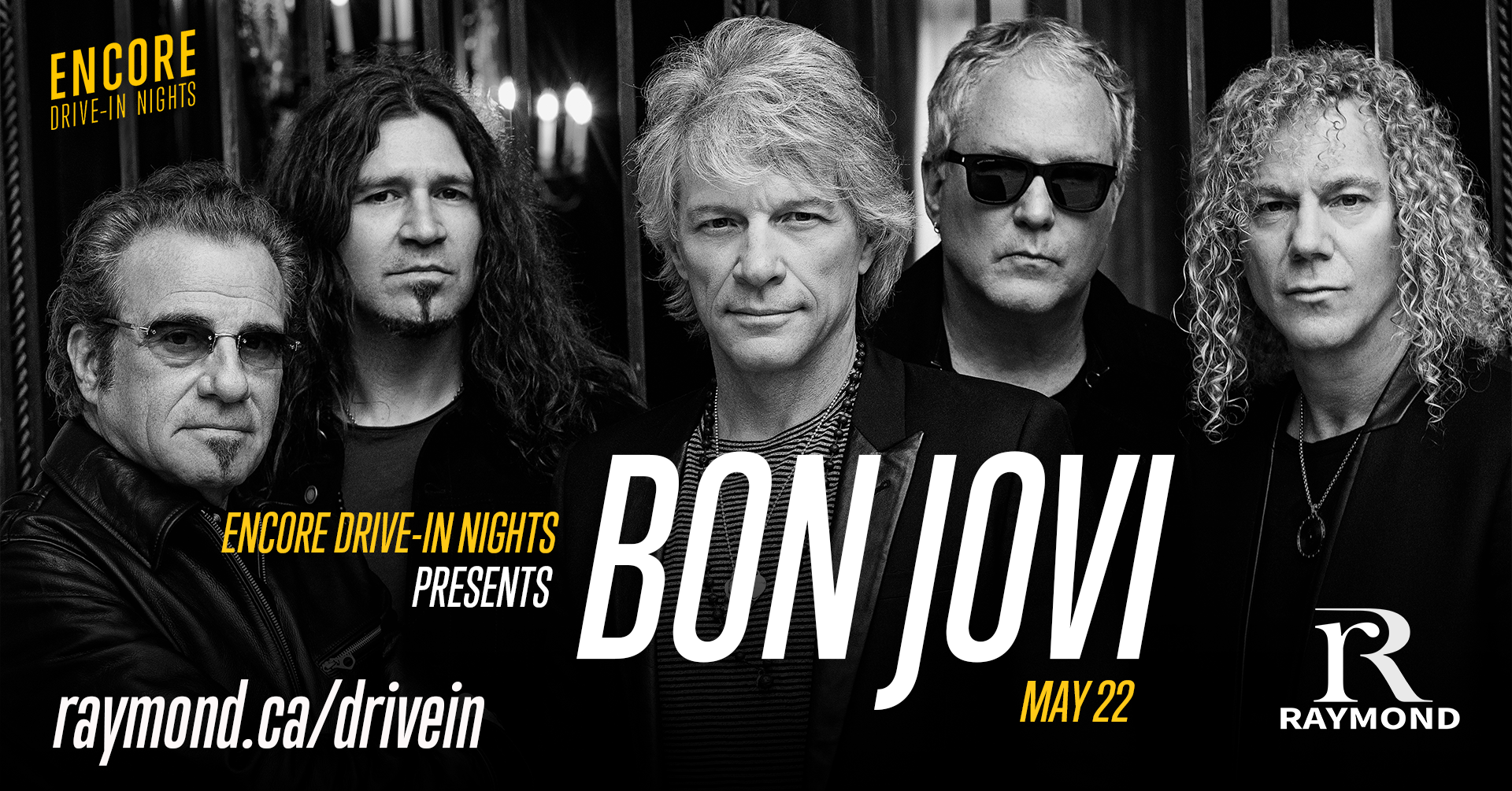 On May 22, the Town of Raymond proudly presents the return of Encore Drive-In Nights with Bon Jovi, one night only! The brand-new pre-recorded concert will feature one of the biggest names in rock music. Limited tickets will be available due to COVID-19 restrictions and social distancing measures will be implemented.

“We’re really excited about giving people something to do on the long weekend that is COVID restriction-friendly. Because of the situation, people can stay in their car. It has always been allowed to have a drive-in, even during the steepest restrictions through AHS. It’s a great, safe way to enjoy a brand-new, never-seen-before concert,” said Greg Robinson, the town’s director of Community Development and Human Resources. “We fully expect tickets to sell out quickly.”

Robinson noted the show will only have room for 175 cars due to social distancing. “You can put five or six people in each car. Almost 1,000 people could attend.”

Drive-In Nights will be located behind the Fire Hall in Raymond â€” the same place previous shows were situated, including a high-octane Metallica concert. And, the concerts will feature old school FM radio technology in vehicles.

“To me, it’s an enjoyable sound. We’re a small community and we don’t need to blow out all the neighbours,” Robinson joked, adding some people come with stellar stereo systems to “create a more enhanced experience for their show.”

According to Robinson, the Bon Jovi concert will not be broadcast and the show will not be streaming or showing on any VOD or online platforms. But, Robinson pointed out, “Some of the shows this summer will be live.”

So far, there are three shows booked for the summer, including a country show â€” and the hope is for the town to present and host a total of 10 unique and must-see shows this summer. Promoters, Robinson noted, have lined up some excellent talent.

Robinson added there will be food trucks on location and the hope is to also have vendors selling merchandise. “Most people show up early and want a good spot.”

“We hope to offer other things to do for people. But again, enjoying it safely and distanced,” said Robinson.

Robinson said the town is trying to connect with other communities with drive-in equipment the town has purchased, including a jumbo screen. This way, other communities can host their very own movie nights, employee nights, etc. The Drive-In Nights are an opportunity to bring new people into town and to showcase the best parts of Raymond, Robinson added.

Tickets for Bon Jovi: Early Bird $89, General Admission $115 and VIP $239. There will also be a pre-sale for Bon Jovi fan members Apr. 28. Public ticket sales begin Apr. 29. Ticket prices are per vehicle and for up to six people. Strict COVID guidelines will be in effect. Gate opens at 7 p.m. Show starts at 9 p.m.