Posted on 9 February 2021 by Ryan Dahlman 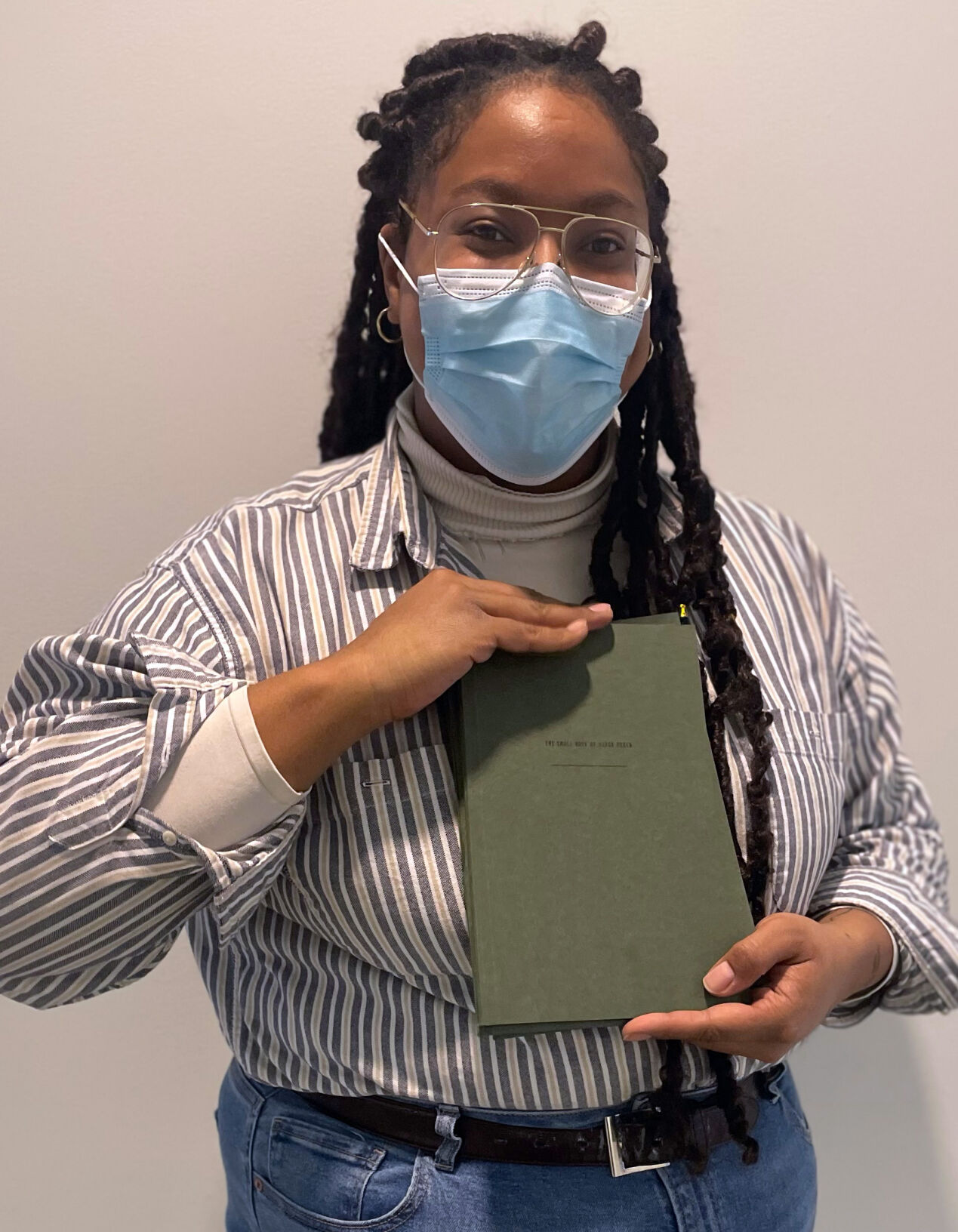 Lethbridge’s Southern Alberta Art Gallery (SAAG) is hosting a couple if important events in recognition of Black History Month. One occurred Feb. 6 but there is one still coming on Valentine’s Day from 2-4 p.m.

Courtney Faulkner. Public Engagement & Event Coordinator [Adult] and Dominique Charles, the SAAG Public Engagement Intern were the two main catalysts for this event. Faulkner was extremely thankful for Charles’ involvement and noted she will be a big part of the actual event Feb. 14.

“We are fortunate to have Dominique Charles as our Public Engagement Intern during this time, and she has a deep passion for the Publication Studio,” explained Faulkner. “She took on the project of compiling a series of open-source poetry from black writers, designing the layout, and writing a meaningful forward sharing her experience as a black woman living in southern Alberta, connected with the larger movement of Black Lives Matter globally. Her publication, the small book of black feels, is incredible and is a really special addition to this workshop, made possible by her presence at the gallery. Everyone who attends the workshop will receive a copy of this book.”

The series is edited by Sharifa Rhodes-Pitts and includes:

THE FACT OF BLACKNESS | FRANTZ FANON

Frantz Fanon was perhaps the seminal theoretician of postcolonial politics, culture and identity; his two major books, Black Skin, White Masks (1952) and The Wretched of the Earth (1961), have been widely read and have provided an important inspiration for liberation movements around the world. Born in Martinique, Fanon studied medicine in Paris and became a psychiatrist in Algeria during its wars of liberation from France. ‘The Fact of Blackness’ is Fanon’s celebrated essay describing the consciousness of the ‘black’ subject in a world of ‘white’ power.

Sylvia Wynter was born in Cuba in 1928 to Jamaican parents who soon repatriated to their home country. A novelist, playwright, and cultural theorist, Wynter’s work has focused on redefining what it means to be human in the face of Western thought. She is professor emerita at Stanford University.

William Edward Burghardt Du Bois (1868-1963) was among the most influential proponents of civil rights during a presence that covered five decades. A sociologist, historian, novelist and activist, Du Bois was the first African-American to earn a Ph.D. from Harvard. He went on to lead the Niagara Movement, a precursor of the N.A.A.C.P. For many years he edited that organization’s journal, The Crisis. Du Bois later trained his attention on Pan-Africanism, anticolonialsim, socialism and world peace. He moved to Ghana and rescinded his United States citizenship a few months before his death.

Publication Studio is a network of 11 studios spanning four continents, that prints, binds, and distributes books by hand, creating original work with artists and writers they admire. Founded in 2009 in Portland, Oregon, Publication Studio is intended as a social gathering place for people interested in publication, and the publishing of their own work, producing books one at a time on-demand, using a variety of means.

This event is hosted online over Zoom.

The organization of the workshop took some time explained Faulkner.

“We plan most of our events 3 – 6 months in advance. With the pandemic we’ve been offering most of our events online, especially now with the gallery being closed to the public. Some programs transition more easily to an online format, like our SAAG Cinema (we hosted) with Dana Inkster on February 6,” explained Faulkner. “We can screen a film online through zoom, then have a conversation together afterwards. It’s been exciting for people to be able to participate from outside of Lethbridge: we’ve had attendees from Montreal, Toronto, Vancouver, and even New York and London.

“For our Publication Studio Workshop there is a very tactile element that we had to get creative with to transfer to an online program. Usually people come to the gallery and learn how to use our book binding press, and we make a run of books together. This time, we’re publishing a series of pamphlets ON THE BLACKNESS OF BLACKNUSS, initiated by the Moor’s Head Press of BLACKNUSS: books + other relics, published by Publication Studio Hudson, and edited by Sharifa Rhodes-Pitts. We’re putting together packages that people can pick up from the gallery. Everyone will have their materials, and then tune into the online event on February 14 to assemble their pamphlets, and talk about the writing.”

Faulkner indicated that their public engagement intern Dominique Charles will be offering a poetry reading during the Feb. 14 event, from a collection of poetry by black writers she compiled and titled the small book of black feels. They put a lot of work into making this book together in the Publication Studio at the gallery.  Copies will be offered to everyone who attends the workshop.

“This was a great project for Dominique to create during her internship, and to share her personal experience of blackness,” added Faulkner.

SAAG’s Publication Studio is connected to a larger network of 11 studios spanning four continents, that prints, binds, and distributes books by hand, creating original work with artists and writers. Faulkner explained that the main Publication Studio was founded in 2009 in Portland, Oregon, Publication Studio. It is intended as a social gathering place for people interested in publication, the publishing of their own work, and producing books one at a time using a variety of means. The ON THE BLACKNESS OF BLACKNUSS pamplet series is available to SAAG through this network.

It is all very deep and meaningful and the experience for participants should not only be educational, but meaningful perspective-wise as well as emotionally. Faulkner believed it will be constructive intellectually. Learning helps reshape attitudes which ultimately leads to societal change.

“We hope to share literature that is meant not solely for consumption, but for deeper understanding. We hope to gather a community of people who want to learn about black history, how it affects the present moment, and to feel empowered to continue taking actions to dismantle white supremacy<” explained Faulkner. “The stories in the pamphlet series are important to know to more fully understand this history, all written by black writers, giving them authority and autonomy to tell their own stories. The publication Dominique made is a piece of literature available to black people, about black stories that isn’t specifically referencing black trauma. It serves as a beautiful insight into Black joy and resistance, and is valuable for non-black people as well.”

Success for Charles is meaningful conversations and connections during the event, that can continue onward into building strong, caring, anti-racist communities.

She noted the success of this event continued to be measured by action hereafter. For people attending, she and Faulkner hoped they leave with new information as well as a renewed understanding of Blackness in North America.

“When I started this it became very clear to me that the stories I see everyday about people who look like me are about all the struggles we face not our simple emotions or beauty. Struggles that modern day Black individuals experience but have never had reprieve from,” added Charles. “For Black people reading these I hope that they hear about things like The Freedmen’s Bureau and No Humans Involved (N.H.I) and feel a breadth of emotions about these past actions that they might not have even had the opportunity to even understand prior. In the foreword of the small book of Black feels I actually write directly ‘For white people (and non-Black POC) I hope this book is a testament to Black strength, resilience and beauty and most of all, joy.'”

Cost is $20 or $10 with SAAG Pass. Call 403-327-8770 or online at https://www.saag.ca/public-engagement-adults/publication-studio-workshop-february