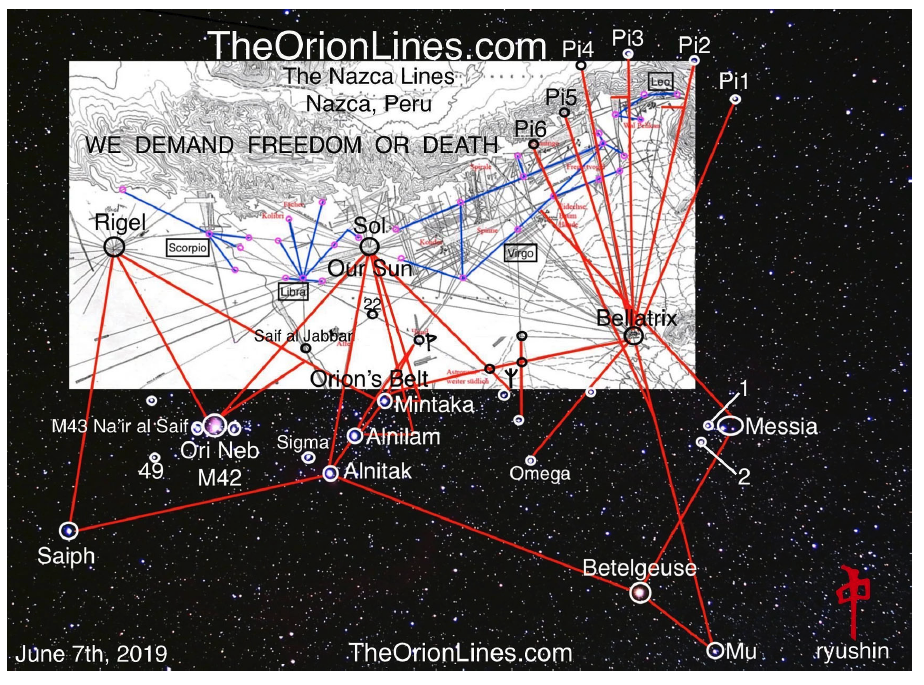 For centuries man has been intrigued with the South American Nazca lines. Out in the middle of nowhere in the Peruvian country, they are mostly visible from the air when touring by plane. While credit is sometimes attributed to the ancient Nazca people, few agree as to who made them and how they got there but some of them are surrounded by apparent airstrips. They are composed of large designs drawn in the plains of the desert to the north of the settlement of Cahuachi.

There were more than 350 of these illustrations which can be anthropomorphic, zoomorphic and phytomorphic figures, in addition to geometric lines several kilometers in length. In a November 2019 Coast to Coast AM story https://www.coasttocoastam.com/article/video-japanese-researchers-discover-143-new-nazca-line-drawings a team of Japanese researchers discovered an amazing 143 new Nazca Line drawings.

Fast forward to this year, I came across an investigator who claims to have solved the origins of the Nazca Lines and yes, the aliens did it. Ryushin Sean Malone is the owner of https://www.theorionlines.com. It is loaded with research he’s done over the years and offers everyone a free book called “The Orion Lines Solving the Nazca Lines & The Secrets To The Stars” https://188ab611-acba-4f32-aa29-699f0321f07b.filesusr.com/ugd/d0b2c7_b9a48a5b55f14ebc9ae228b0145746fe.pdf. It is filled with charts and diagrams but the bottom line he illustrates that there is a connection between the constellation of Orion and the Nazca lines. Looking from outer space our Sun (Sol) is in the center while Rigel is on one side and Bellatrix on the other. Many in the past concur the Nazca figures seem to resemble runways from the sky and the book seems to give several examples of Orion patterns on the Earth ranging from the Giza pyramids, Stonehenge, Arizona Grand Canyon and more.

Malone’s website offers more information and while some may think topics are “pie in the sky” conspiracy theory, the idea of extra-terrestrial presence is now becoming more mainstream. Many ancient cultures and religions agree with life from outside of Earth and while we have difference conclusions as to what they are, their existence is becoming less ambiguous by the day. This short video https://www.banned.video/watch?id=60819701cc69f3017f9bf6d2 from Greg Reese demonstrates the theory of an alien invasion now in public dialogue. Malone does a few broadcasts a week https://www.youtube.com/channel/UCexdAIZKA5FSmA-2ydDhYAQ and has started to get picked up by some big names in the truth movement https://www.youtube.com/watch?v=urcxdZNfH9M so I expect him to gain more traction this year. I am limiting my opinion on what I think of all his findings but there is no doubt in my mind it is more than a lifetime of work. What do you think? We definitely live in an age of enlightenment and I believe we are on the edge of making leaps and bounds which will make the industrial age seem like a cake walk. Will Malone’s work be part of that movement? Time will tell but I would love to hear from you!

Sky watch for the next month:  Download this month’s sky free chart at http://whatsouttonight.com/Resources/2021MaySkyWOT.pdf

1.Thin Crescent Moon sets with Venus- Wednesday May 12th look NWW after sunset as these pair set just after 22:00.

2.Mars & Crescent Moon sets into the night- Saturday, May 15th look West after sunset as this pair stay close and set after 1:00 am.

3.Saturn & Moon night rise into the dawn- Monday, May 31st after 1:30 am look SEE as this duo rises together into the sunrise. Jupiter’s just East of them also.

4.Eta Aquarids Meteor Shower- caused by comet 1P Halley shoots 15-20 meteors per hour after Wednesday evening May 05th and before dawn on Wednesday the 06th. The moon will be in its waning crescent phase but below the horizon before dawn in the Constellation Aquarius (SEE).

Neel Roberts is a local astronomer in Southern Alberta and welcomes your comments at Neel_Roberts@ptccanada.com, Tel: (403) 560-6574. Check out his work at http://www.ptccanada.com.