Posted on 2 September 2021 by Contributed 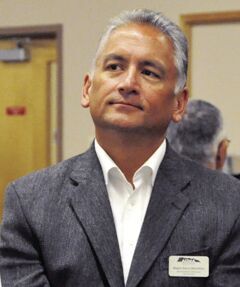 Barry Morishita, current mayor of Brooks and former President of the Alberta Urban Municipalities Association, will lead the Alberta Party into the 2023 election and the Legislature.

Morishita has been advocating for Albertans for years, as a councillor, mayor, and as the President of AUMA. The Alberta Party is excited to announce that he will become the permanent leader of the Party.

“As a compassionate leader and experienced community builder, I believe that a new, fresh approach to politics is what Albertans need right now and that the Alberta Party is the vehicle to drive that positive change,” stated Barry Morishita, Alberta Party Leader.

“Over the past four years, I have travelled across our province and have heard from countless Albertans who are looking for a new approach to politics. It is time for a renewed focus on collaborative, democratic leadership that works to better the lives of all Albertans. The Alberta Party is committed to solutions and changes that are practical, affordable and rooted in local communities. That is why I have chosen this path and why I will be working hard over the next few months to earn your support and your trust.”

Nominations for the leadership of the Alberta Party closed on August 31st.

Morishita’s transition team consists of Lisa Holmes, former mayor of Morinville and past president of AUMA, and former MLA Doug Griffiths, who are ready to aid in growing the team and moving forward. The Alberta Party stands to benefit greatly not only from Morishita but his ability to bring the best and brightest to the table.

“I couldn’t be more thrilled about Barry’s leadership and team. The Alberta Party is ready to fight for Albertans and end the partisan bickering they see in the Legislature,” Conrad Guay, Alberta Party President.

I also want to take the time to thank our former Acting Leader Jacquie Fenske. She has been a peerless advocate for the Party and for Albertans. We enter our next phase in a strong position, owing much to her efforts.”