Worming her way to the top, woman developed business from the ground up 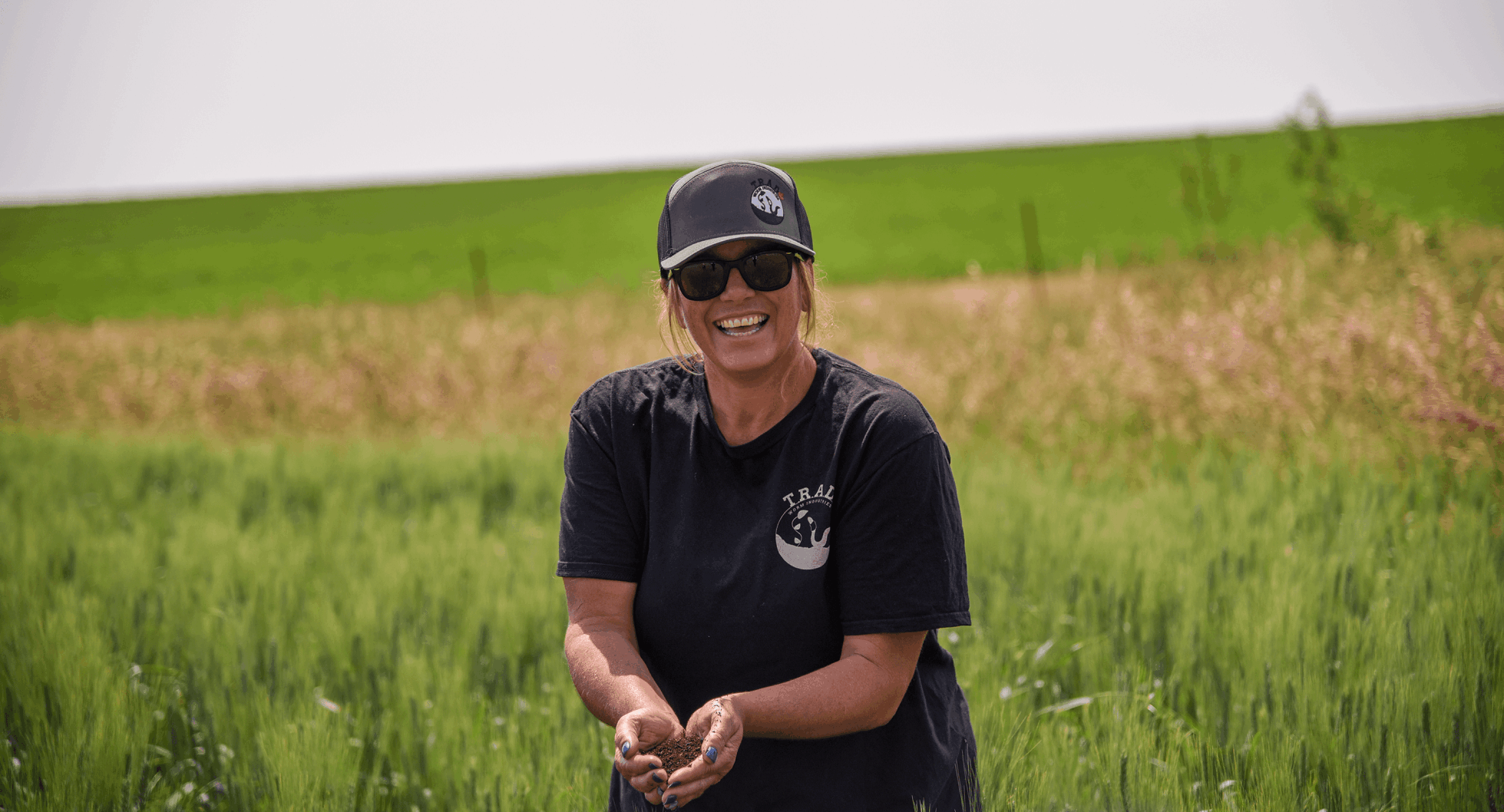 T.R.A.D. Worms Industies Ltd. CEO Roxanne Doerksen poses for a portrait in the fields of her farm with a handful of worm castings. As well as the creation and harvesting of these castings, T.R.A.D. Worm Industries also hosts a fully functioning farm.

Coming into nearly three years of operation, T.R.A.D Worm Industries LTD continues to explore what it means to have healthy soil and healthy food.

The company’s CEO, Roxanne Doerksen, described the beginnings of the idea as a “cacophony of events” that took place while she was attending classes at Medicine Hat College.

“I retired from a real, normal job, where I got a paycheque. I loved what I did but you know I had done that for 25 years, so it was time to, you know, try something else, so I decided to go back to school,” said Doerksen whose operation is located in Cypress County. “While I was in school, my middle kid got sick. She was on all these aggressive drugs to try to control â€¦ we didn’t really know what it was at a time. We thought it was leukemia but it wasn’t. We thought it was a lot of other different things disease wise so they had her on these monster drugs, she was turning this weird shade of orange, she was in isolation and then finally our doctor said that maybe there’s something we should do instead of having her on all of these narcotics.”

At the time, CBD oil was new on the market, said Doerksen, and she worried about the potential of addiction for her daughter.

“Cannabis seemed like a really bad thing, and I’m like, no thank you, I’m going to rely on traditional medicine,” said Deorksen. “Finally it came to the point where they said we’ve got to either do something aggressive or change practices. I started looking into CBD oil and honestly I really tried to study what it was, if it’s not habit forming and it’s not all these things that I’ve been told my entire life. We tried the traditional medicine, and it did what it was supposed to do, but her body was starting to show real effects of it so we thought is there something different we can do.”

This research brought Deorksen to articles on nuns in California that had been growing CDB-heavy strains of cannabis for children with cancer to help control the effects of chemotherapy.

“I’ve had a worm farm in our house since 1997. I thought it was kind of a cool thing, because we’d lived on an acreage up in Edmonton and I thought, you know, I’m too lazy to drive my garbage to town, so I was familiar with worms, but not to this scale. I went to my professors and I said is this doable. Can we grow cannabis, just like the nuns do in California, can we grow it naturally, without synthetics, would it be a better product and they’re like yeah, let’s try it.”

“At the time was just a tiny little company and our only goal was to produce natural castings; they’re not treated, they’re not sterilized. They’re straight out of the butt of a worm and help people that were growing cannabis for, you know, medical things like the MS grow society, so that’s how this company started. and from there it has. It’s been a very steep and scary growth curve,” said Doerksen.

From there, the business has taken off at an exponential rate. In 2020, T.R.A.D Worm Industries won Business of the Year.

“In this two and a half years, I look back and almost overwhelming how much how much we have changed,  how fast we’ve changed, how basically we are running at an inhumane pace and we’re still okay,” said Deorksen. “It’s the joy of getting to do this, the joy of being curious about soil and it’s the joy of learning how to overcome some serious screw-ups. But yeah, there are days it’s overwhelming. There are days we work 14, 15 hours because to keep up with the demand and that’s part of the fun.”

The business has since moved on from only producing this worm castings, which are applied to the topsoil of gardens and fields as opposed to synthetic fertilizer to rejuvenate the soil and encourage healthier, more robust plant growth. Doerksen has moved into both the application business for several large, commercial farms and further into research and development regarding the microbiology of the soil around us, and how it affects plant growth.

Their market, said Doerksen, has become “everything.”

“We have an incredibly diverse market,” said Deorksen. “We have the cannabis growers, the home growers that are growing for medical reasons. We have the apartment dwellers who are container growing and have beautiful tropical plants, we have the big gardeners, we have the small gardeners, we have the commercial farmers that we get to put on sections and sections and sections of biologicals. We also have a really specific market with people who want to be all natural, because what we are is 100% all natural. There are lots of castings on the market, but you have to be so careful because if you look at the bags and the castings have been sterilized, what is the point? Because the point of using castings is biology.”

“Harold Fieldberg’s motto is, healthy soils, healthy plants, healthy food, healthy bodies. All of that comes back to exactly what we’re doing here is trying to get our soil healthier to grow a healthier plant,” said Jodi Meyer, a project manager at T.R.A.D. “It’s been so interesting.”

“I think we picked up about 2000 kilos worth of food. And then we took, processed it on site, and proved our thesis to be worthy. All of the electric or the electronic monitoring systems worked all of the sort of parameters in which we were looking for,” said Doerksen.

This is one of the busiest times of year for T.R.A.D Worm Industries, between application of the product for larger clients, and reviewing the biology of every sample under microscope to better understand the interaction between their casings and the soil it’s applied to.

“Every brew we have we look under the microscope, we look for pathogens, we look for the right balance so we know exactly what’s in our extracts and our brews, so there’s never a question as to what is going on. The question is, how is what we are putting into the soil going to effectively support the microbiology that’s there, which is incredibly cool,” said Doerksen.

T.R.A.D. Worms Industies Ltd. CEO Roxanne Doerksen poses for a portrait in the fields of her farm with a handful of worm castings. As well as the creation and harvesting of these castings, T.R.A.D. Worm Industries also hosts a fully functioning farm.