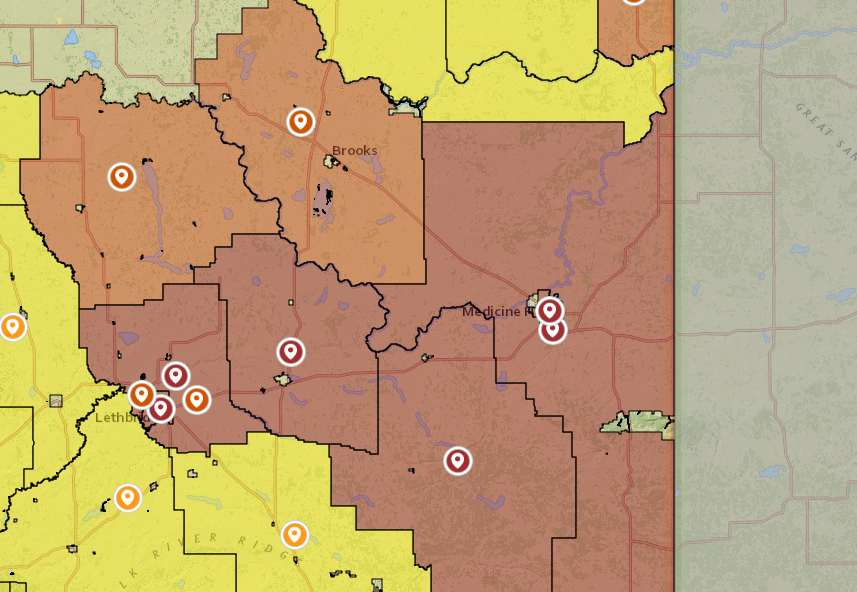 As of June 28, there is a fire ban in Cypress County, the M.D. of Taber and the County of 40 Mile, as well as a fire advisory in the Special Areas Board.

Even with recent rainfall, the risk of a fire is high, with possible return to “crossover conditions” in the coming weeks, when the ambient temperature and relative humidity are the same.

“Extreme is what I would put it to. That’s why we put the ban in place prior to July, at the end of June. We upgraded our restriction to a ban because the risk of a fire starting was so extreme. And if we did have a fire, fire spreads could be unpredictable,” said Stewart Payne, Fire Chief of the County of 40 Mile.

The increased fire risk can be taxing on firefighters throughout the districts, many of which are volunteers.

While these volunteers are trained to handle many kinds of situations, and in the M.D. of Taber train weekly according to the anticipated issues of the season, such as wild and grass fires, repeated or simultaneous instances can take their toll, said Merrill Harris, Reeve of the M.D of Taber.

“This past weekend, July 3rd and 4th, most departments responded to two to three calls in a day. Typically you’re lucky to get a few calls, you know, every other day, but to have multiple calls for one day is very taxing,” said Glen Durand, Fire Chief for the Special Areas Board.

Those in agriculture are asked to be careful when doing any sort of farming operations, as these activities under such extreme conditions can lead to fires, and to keep an eye on their land.

“It would be awesome if they had their tanks full of water and ready to go,” said Payne.  “Water supplies are quite the critical thing on most fires, if fire departments run out of water, and we need to replenish. So if a landowner sees fire start on their property, it’s always the quickest response, they can get their own tank of water there. Travel times for volunteers to get to the hall, get the county equipment, drive the county equipment onto site, it can be quite time consuming and fire can spread quite quickly.”

While many of the municipalities can rely on mutual aid in the event of a large fire or multiple simultaneous fires, no response will be quicker than a landowner on their own property in the event of an emergency.

Fines for those not obeying the current fire restrictions are still in place, but the best prevention in place is public education and co-operation during periods of high risk, said Durand.

“Be mindful. It doesn’t take a rocket scientist to know that it’s hot and dry, we haven’t received much moisture and the final risk would be very high,” said Harris. “We just ask everybody to be mindful and do their part to not cause a fire.”