Brenner impacted many in her four decades of adult learning

Posted on 31 March 2021 by Greg Price, submitted by Taber and District Adult Learning 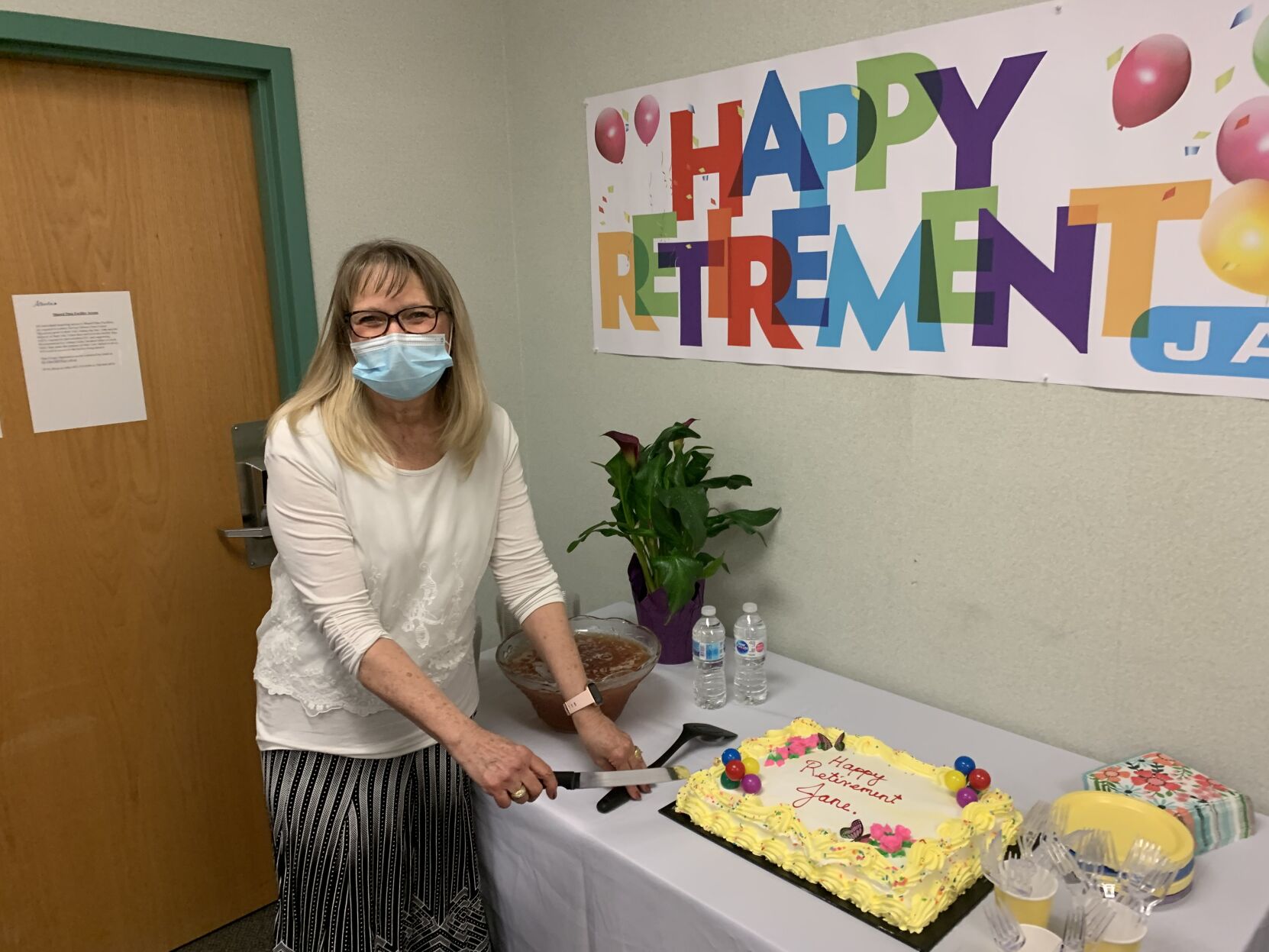 For Jane Brenner, the thirst for knowledge has long been in her bloodline.

That fact was made quite evident in the legions of well-wishers who wished her a happy retirement in person, or through Zoom meetings this past week at the Taber and District Adult Learning Association (TDCALA) boardroom.

Past and present employees, heavy hitters in the education field, local politicians, and friends and family were all present to wish a woman who served as the very foundation of furthering adult education in southern Alberta for 36 years, as she rides off into the sunset from her stint as executive director of TDCALA.

Cousin Cecily Nelson recounted how strong the roots were in the family tree of continual learning, nurtured in the waters to quench the thirst of further enlightenment. Brenner’s grandmother was the very first librarian in Taber’s history.

“There’s two types of people in the world, the givers and the takers. Jane is very definitely a giver. She is one of the most generous people that I know. I call her a second miler because she fulfills all the requirements of the first mile, but then passes the mark and goes onto the second and third and fourth mile and beyond,” said Nelson. “She follows in the family footsteps. She has our grandmother, our Nana (Ethel) Hall, who 80 years ago, as a pioneer in Taber, petitioned Taber town council to give her a spot to start a library in the community. They gave her an upstairs room in the fire hall and she got a lot of books donated, opening a library three days a week and broadening the horizons of countless community people. I see Jane carrying on that tradition in facilitating the education of many adults.”

Politicians from numerous levels of government made time for Brenner in the organized Zoom meeting, where dozens upon dozens of people waited patiently to talk about how far reaching Brenner’s influence was on the betterment of so many lives.

“With all the people you work with, it’s a great outreach program with all the things you do and all the people you touch. It’s the networks in our community that people often don’t see at times, but yet without them, there would be a lot less positivity and a lot less progress on the social side of our community,” said Martin Shields, MP for Bow River, who started off the legion of heartfelt comments in the Zoom meeting on Wednesday (March 3), that was two screens wide and fully deep at its peak, of the people whose lives Brenner had impacted.

Brenner’s influence was not only locally in southern Alberta, but provincially as well. Taber was firmly on the map in the message that self-improvement never had a time limit on it, thanks to Brenner’s passionate vision.

“Back when we could actually travel (pre-COVID). Back two years ago when I was first appointed as a minister and I was visiting post-secondary institutions around the province, someone from my department had said if you want to get a really good understanding of how a strong and successful community adult learning works and operates, you need to go and see and speak to the one in Taber,” said Demetrios Nicolaides, Minister of Advanced Education for Alberta, to a smiling Brenner who took in the Zoom festivities with her husband by her side. “That stuck in my head that Taber is held in high regard and I’ve always understood it to be a model of incredible success. I certainly saw that when I came down for a quick visit. Everyone would agree here, that is largely attributed to the work you have done and your leadership. Recognizing the important impact that our foundational learners and our adult learning work has. It is such a remarkable part of our higher-education system, and it impacts the lives of so many individuals. You’ve made a meaningful difference in so many lives.”

Taber Mayor Andrew Prokop noted there have been 34 different cultures that Brenner and the staff at TDCALA had helped over the years with its breadth of programming in southern Alberta.

M.D. of Taber councillor and TDCALA board member for nearly three years, Tamara Miyanaga, had seen the impact Brenner and her staff had made on its residents that span 4,200 square kilometres in the region.

“Long before I came to the board, I had formed an impression of Jane with TDCALA. Not only did she serve this organization, she has built a legacy of building up people’s confidences by having them acquire skills. Whether that be reading, managing their finances or finding work, for that, she has developed a whole following of people that have allowed our municipality and further on to have that development,” said Miyanaga. “It has also developed confidence in themselves. I have seen people I’ve dealt with on a social assistance point of view come here. We may have helped them with rent in a different organization, but here she can teach them to read, get a job. It’s that whole adage of teach them to fish and they can take care of themselves. Jane (was) the person to teach people to fish so that they can sustain themselves. It’s not just newcomers, but also people who have lived here a long time in the lives that have been impacted. Jane found a way for people to improve themselves.”

That love Brenner had for anyone who walked through the doors of TDCALA also transferred to her staff, with many warm words coming from past and present employees.

Former employee Donna Sato recalled getting to know two sides of Jane Brenner. There was the one side everyone saw in the leader at the top of the work triangle in executive director Jane. Then Sato got to know Jane the person, as Sato was struggling with some personal matters.

“That was the person who had such a kind heart. My dog had died the day before and the next day I went to work and I left my desk for a few moments. When I came back, a big vase filled with beautiful flowers was there along with a card with wonderful messages from all our staff,” said Sato, fighting back the tears of remembrance. “I thought to myselfâ€¦’who does that?’ There are not many employers who do that. I’ll forever be grateful to that woman. When I decided to leave Taber Adult Learning, I was so scared to tell you because I was there for a long time and I didn’t want to disappoint you. But, I got the exact opposite reaction. You were nothing but supportive, and you wrote me this beautiful letter, and to this day I sometimes still look at it whenever I lose a little bit of confidence in myself. You taught me how to be a good person to different types of people. You have been a huge blessing in my life.”

Sharon Holtman, a former Horizon School Division trustee of 30 years, was on the committee for when Jane Brenner was first hired more than three decades ago.

“I remember Jane giving an excellent interview. We knew from her answers that she would make things happen from her sheer attitude. I can and will do this for us and she succeeded all these years,” said Holtman. “At that time, if you could think of a course and find eight participants, Jane helped you get instructors and you were added to the booklet that came out in the spring and fall. Everyone waited for that booklet and they lined up to register. Jane was the master of making everyone feel welcome.”

Holtman was in a festive mood for her Zoom call from home, dressed in a jester/clown costume, which fit into the theme of her prepared message.

“J â€” Joy was always a part of her job, forever juggling to keep many balls in the air at the same time. A â€” Adventurous, if a great idea was presented she was always trying to make it work. Always available, even if it was the 100th thing she was doing that day. N â€” Natural talent, that made things so easy. Jane never believed she couldn’t do it when it came to programming. E â€” Efficient, just look over the last (36) years. Effort, it was always there. Easy, she made it all look that way.”

Brenner’s legacy at TDCALA will live on far past her retirement. Alf Rudd, chairman for the board of directors, noted as part of a retirement gift, it passed unanimously TDCALA authorize the establishment of a bursary up to $1,000 that is set up from general funds as the discretion of the board, and be set up as the Jane Brenner Foundational Learning Award.

Brenner has been assigned to set out the policy for the criteria for the awarding of the bursary, be it for one or many recipients.

“The whole board got behind this and it’ll be a great legacy to let the people in this community know how much we appreciate you,” said Rudd.

Jane Brenner celebrated her retirement recently after many decades of service.