In with Taber, out with Suffield and Blood 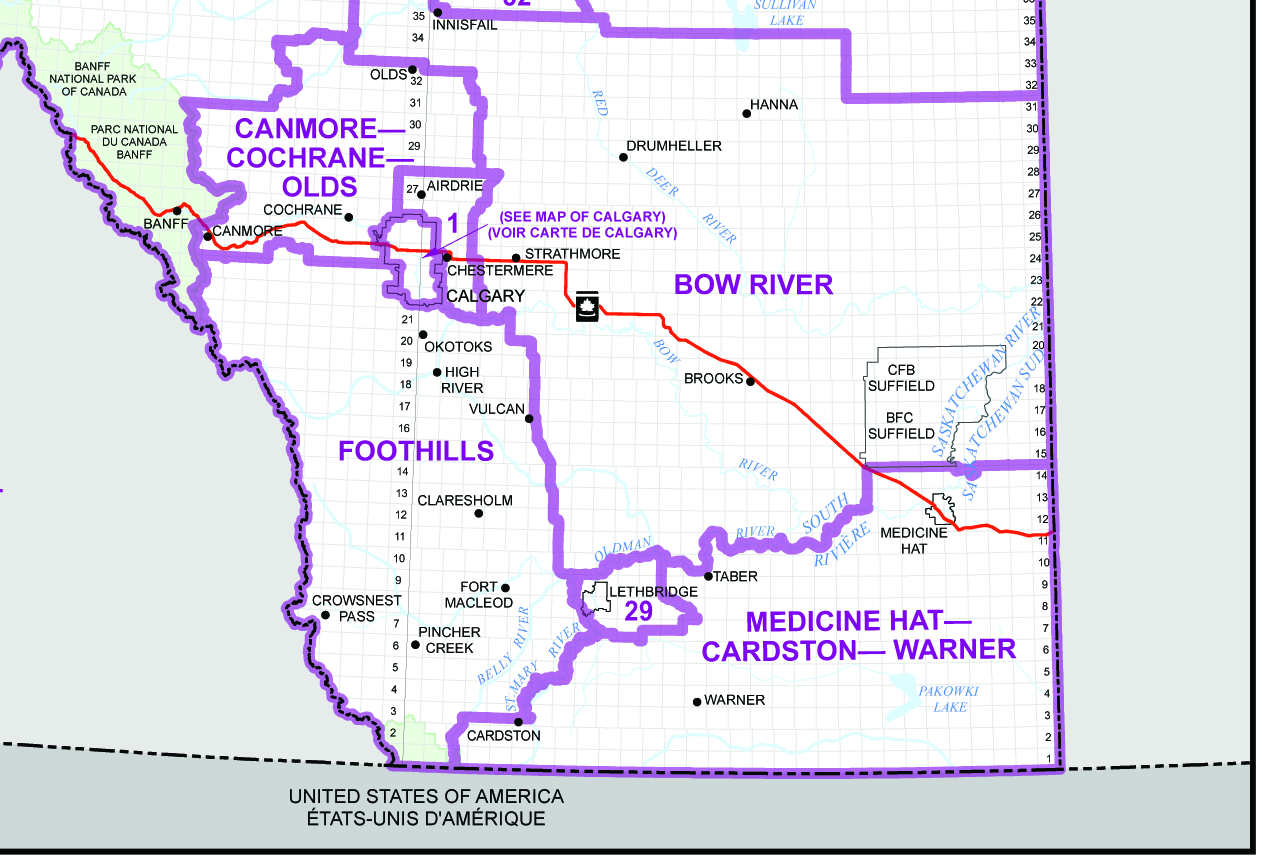 The local federal riding would keep Medicine Hat, Cardston and Warner in a proposal to realign constituency boundaries in Alberta, but gain Taber and lose CFB Suffield, part of Cypress County and the Blood Tribe Reserve.

The boundaries were last redrawn by the federal commission on electoral boundaries in 2014 and this year, due to population gain in Alberta, it is determining how to best add three seats to the province before the next election.

The commission accomplished that by creating new ridings in major centres, where there has been growth, and then moving boundaries going outward to keep about the same population in each. It will move to public feedback stage this summer and fall.

“I like the riding now and really enjoy the work I’ve done across it,” said Glen Motz, who was elected the riding’s Member of Parliament in 2016.

“I’m not in a panic about anything that’s being proposed, but I’d be saddened to lose the Blood Reserve and the base (CFB Suffield),” said Motz.

“I think they’ve done a pretty decent job of trying to meet the requirements.”

The proposed map would create larger Bow River and Foothills constituencies, both adjoined to Medicine Hat-Cardston-Warner. It would separate out the northeast portion of Cypress County, north of Township Road 150 and CFB Suffield, as well as set north-west boundary as the South Saskatchewan and Oldman rivers, thereby splitting the Municipal District of Taber between two ridings.

In the western edge, Cardston would remain, but the Blood Reserve would move into the riding of Foothills.

“I think the riding is enriched by having the Blood Reserve in it,” Motz said. “Also Bow River would take on a huge swath, but geographically and economically, all that area (Hilda, Schuler, Suffield) flows to Medicine Hat,”

“I’d like to see if we could keep that population consistent — it’s not a huge population — in Medicine Hat.”

The riding was last redrawn in 2013 removing Brooks and adding Cardston and the Blood Reserve.

The process renamed the riding, adding Cardston and Warner — areas previously in the Lethbridge riding — while Taber was placed in Bow River, a new riding at the time.

It would include not only Brooks, Hanna and Strathmore, but areas from Vulcan County to Innisfail, and areas east to the Saskatchewan provincial boundary.

Airdrie-Chestermere would remain a riding on the eastern edge of Calgary, Lethbridge city and county remain in a single riding, while the Foothills riding would stretch from the St. Mary’s River to near, but not including, Canmore.

Motz said the Blood Reserve is more accessible from High River and Okotoks (the major population centres in Foothills), than from Medicine Hat.

The commission will hold a series of public meetings on the proposed map in the fall. Events are scheduled to take place in Medicine Hat on Sept. 9, in Lethbridge on Sept. 26, several in Calgary Sept. 19 and 20, as well as a virtual hearing Oct. 14. Interested parties must register by Aug. 15 in order to make presentations.