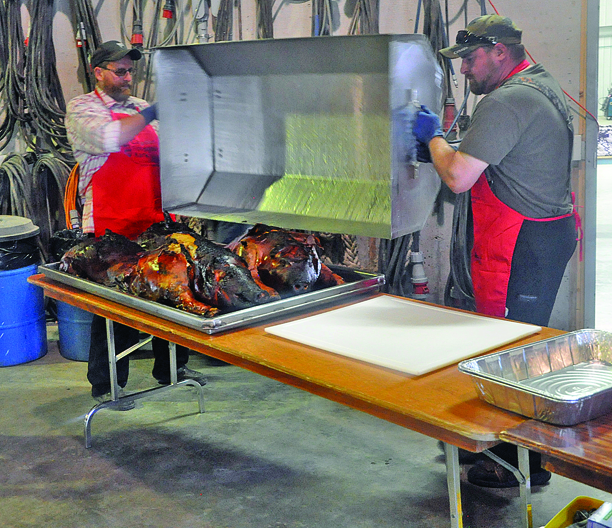 It is always a special time when the Vauxhall and District plans, holds its summer fundraiser and then harvests its crops in support of the Canadian Foodgrains Bank.

This year, the Vauxhall grassroots organization has the added distinction of celebrating the 20th Anniversary of working with the Canadian Foodgrains Bank. With the pandemic-related restrictions being alleviated, the Vauxhall & District Growing Project fundraiser will be an in-person event at the Vauxhall Community Hall. The pig roast barbecue will go June 22 starting at 6 p.m.

They have 135 acres of irrigated spring wheat in an area which is over 15 km northeast of Vauxhall. The crop was seed April 21.

“We already have had a lot of participation from locals farms and business. They have given us the inputs: fertilizer, seed and getting that crop in the ground,” explains Kerby Redekop, spokesperson for the Vauxhall group.

There is hope for a good crop and a successful growing season. It has been trying and frustrating times as lot of events have been cancelled due to pandemic restrictions.

The in-person event will be a relief and welcomed on many levels and so that us a change on one level. However, the support from businesses, farmers, volunteers, and contributors from within Vauxhall and beyond has been consistent.

“Our field operations have always been fairly consistent, even during the last couple of years. You know, even the government kind of saw that farmers needed to be able to carry on business as normal, so we haven’t seem a lot of disruption in that side of the project. With our pig roast coming on June 22, that has been cancelled the last few years. And so I guess what we will see what kind of uptake we get from the community this year and I will be able to tell you if we’re back to normal or if still have a COVID hangover.”

“We are all very conscious of the prices of the inputs we are using and you heard lots about that in the media, so that is true, but that is just what it is to be a farmer, it is just an act of faith with putting the crop in the ground. We do as much as possible to make it grow and we do that every year. We throw all of our money and time and effort at it. But at the end of the day, it is out of our hands and we trust God to make it grow and every year it comes out okay.

“I need to give a lot of credit to the volunteers and the farmer s who are part of our project every year because yeah, you’re right, things are experience. You know, when I was calling around and soliciting donations, no one batted an eye. Everybody is stepping up just like a normal year. Even though it is costing everybody a little more money, there is no resistance and we’ve just got a great group of local volunteers here.”

With 20 years, Redekop agrees there have been a lot of long time members and their families which have grown up with the project. It is heart-warming to see. The base support is very strong and they all have the common goal of helping to feed the world, donating their time and effort to grow the crops with many others chipping in money, fuels and crop inputs.

Redekop adds a Vauxhall-area Hutterite colony has donated a few hogs and will be roast those and bringing them to the Community Hall. There will also be barbecued hamburgers, which we’re getting donated by the local meat shop and also French fries donated by the regions potato processing factories.

It will get under way at 6 p.m. June 22 at the hall. Redekop says there will be some presentations including video ones relating to the projects going on around the world this year as well a look at the Vauxhall Project’s 20-year the history  about the , a lot of really great prizes and fun at the event.

Redekop is grateful for the support in the past and says the Foodgrains Project remains a tradition must support for many because of all the evidence of the great work done by the main organization all over the world, the fact the federal government continues to match them with a 4:1 ratio. Redekop isn’t sure how much money has been generated for the cause by the Vauxhall project but hoped a total would be available and released June 22.