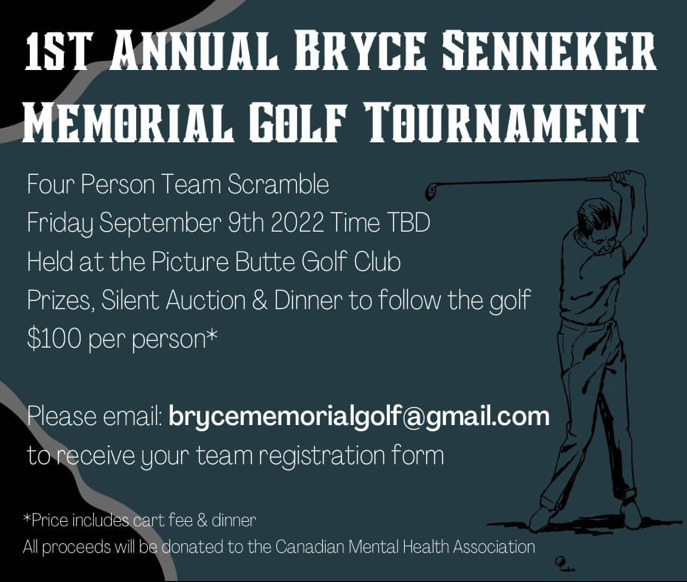 Growing up in Vauxhall, Bryce Senneker was an intelligent, easy going and likeable boy with a good sense of humour.

He started working in the oil patch after he graduated school. He had a lot of friends, a lovely and caring family — life looked good from the outside.

He had suffered a personal battle with mental health that many don’t discuss but in recent years, has been getting more public awareness and support.

Bryce’s younger sister Shelby wanted to do something that would not only honour her brother, but help those who hurt silently like he did.

Shelby led the way in organizing the inaugural Bryce Senneker Memorial Golf Tournament. The event goes Sept. 9 at the Picture Butte Golf Club. All proceeds will be donated to the Canadian Mental Health Association.

“I’ve been wanting to do this for the last couple of years, but with my healing journey, I wasn’t quite ready and I think for everybody else, they weren’t quite ready to talk about it,” explains his younger sister Shelby Senneker. “Bryce was obsessed with golf. It is what he did with his family and friends and such. (The tournament is) for him and getting the family together and having a good time.”

Shelby works in Calgary, while much of her family is still in Vauxhall/Lethbridge region. Choosing Picture Butte was done on purpose as organizers figured it would be the best fit for a number of reasons.

“We were actually intending on doing it Calgary here because my boyfriend is a golf pro at a golf course outside of Calgary and we were going to do it there, but just because Bryce lived his entire life in Southern Alberta like Vauxhall, Coaldale and Lethbridge, all of his friends live and pretty much all of my family: my cousins and my my aunts and uncles — they still live in Lethbridge,” explained Shelby. “It’s just easier for everybody to travel and my boyfriend said Picture Butte was a really good golf course and they could accommodate a really big group of people so we went with that.”

There is no target number for the number of participants. The idea was put out there and the hope was to get as many golfers involved as possible.

“I try not to have too many expectations,” she says. “I feel if I really have high expectations, I want to have 200 people coming. If we hit that goal this year, that would be awesome, if not then that it is something to work towards for next year.”

The challenges to get organized was getting starting and coordinating assistance. She says they have been talking about working such a fundraiser for a couple of years and it was difficult in getting the initial team together.

They are putting the proceeds of the Memorial Golf Tournament to the Canadian Mental Health Association and while the initial thoughts was towards targeting suicide-specific programs, Shelby decided that anybody who attempts or successfully takes their own life will have needed some sort of program which targets mental illness or mental health problems.

“If we can start with mental health as a whole, that would be a lot better, than just having a specific target,” states Shelby. “Through my journey, I didn’t realize I had PTSD after Bryce died… I started doing research on different mental health disorders. When I realized I had PTSD and then going down the path and I just was trying to educate myself better. I have been going to suicide-loss/bereavement groups sort of stuff. Nine times out of ten, people will tell you there was no signs, they didn’t have mental health issues. On and on, but every single person has mental health issues whether they want to admit it or not. Once we get that conversation going, … we all have problems, I just want to target that as a whole, just from my experience.”

Since moving to Calgary, there are more opportunities in discussing mental health, illness and wellness. She says in the rural area and even in Lethbridge, mental health is still a difficult topic to discuss.

Besides geography she finds that the discussions amongst older people, it is also a difficult topic to initiate. She fells blessed that friends her ages are also willing to have open two-way conversations about difficult emotional topics. She says surrounding herself with has been good for her mental health healing.

She said it is still a difficult topic to discuss as people who first learn how Bryce passed, will either avoid the topic or shut down the discussion instead of being open. Shelby points out that Bryce had a difficult time talking about it, whether it be because of stigma or the uncomfortableness of it.

There are other out there who are probably experiencing something similar and she wishes this would change.

“Trying to get into a psychologist, a they are very expensive if you don’t have coverage and to go through the Government of Alberta or Canada to get it covered, it takes up to six plus months to get in and even then, I have a few friends who have gone in through government. Nine times out of ten they are upset with the psychologist they were given and then to get in to another for free takes another six months,” Shelby says with some frustration. “The fact our government doesn’t care and they’re making money off of people’s mental health;  I don’t know, (it seems like) they are going to throw pills at them instead of getting them into therapy, that is just my frustration.”

The Bryce Senneker Memorial Golf Tournament is a four-person team scramble format with prizes, silent auction and dinner to follow.

It is $100 per person and the price includes cart fee and dinner.

Please email: brycememorialgolf@gmail.com for more information and to receive your team registration.