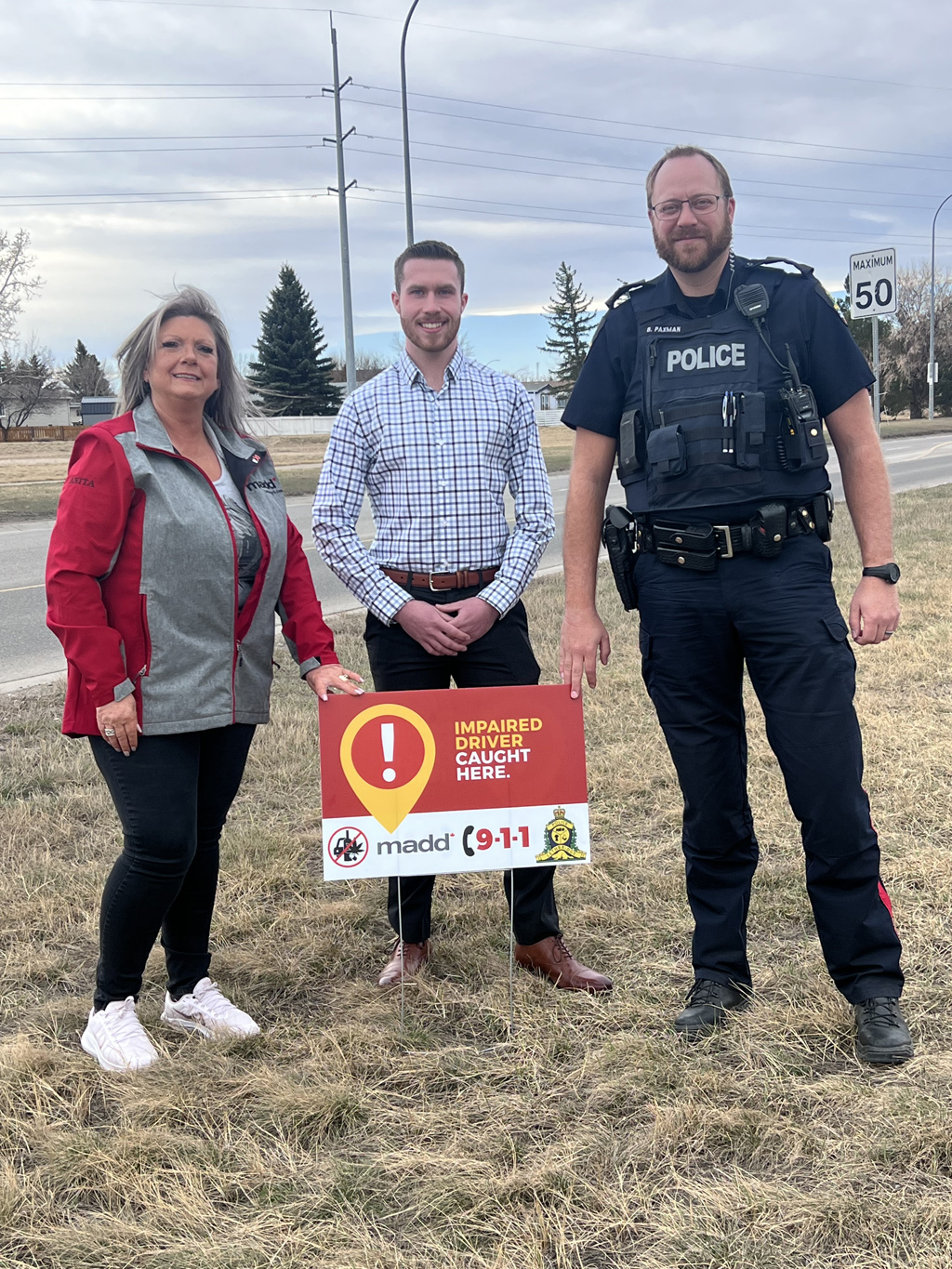 Anita Huchala, President of MADD Lethbridge and Area Chapter, a MADD Volunteer and Acting-Sgt. Brent Paxman of the Traffic Response Unit for the Lethbridge Police were on hand to launch the program.
Recent Posts
Recent Comments

A new, joint multi-agency campaign announced March 23 will remind drivers the stark realities of being impaired when behind the wheel of a motorized vehicle.

In May, mobile ‘Impaired Driver Caught Here’ signs will pop up across Lethbridge where police have apprehended impaired drivers and charged them with a Criminal Code offence or issued an Immediate Roadside Sanction.

According to a prepared statement, “the signs are intended to show that impaired driving happens in all areas of the community and encourage the public to call 911 if they observe a driver they suspect is impaired by drugs and/or alcohol.”

The Impaired Driver Caught Here Mobile 911 sign initiative is a partnership amongst Mothers Against Drunk Driving (MADD Canada), the MADD Lethbridge & Area Chapter, Lethbridge Police Service and the Government of Alberta, which is helped fund the signs. It was announced Wednesday, March 23 to coincide with National Impaired Driving Prevention Week (see: https://bit.ly/3weIAqd).

Anita Huchala, President of MADD Lethbridge and Area Chapter, said the suggestion to brining it to Alberta was made by Tracy Crwford, the Regional Manager of Western Canada for MADD.

Originally started in Saskatchewan, Parkland County which is located just west of Edmonton, was the first Alberta municipality to implement this program.

“It was started in the province of Saskatchewan, and went in Estevan, Saskatoon, Prince Albert, and maybe even Regina had started it. Their signs are very similar to ours. They also have what’s called some vid signs so RIP that report impaired drivers and they have had a positive response, but the numbers have not been tracked but the numbers have not been tracked so we can’t say any statistics or anything because they didn’t track the 911s, but when you talk with the other MADD chapters in Saskatchewan, they say it has gone over well and it really kind of hits home because people see it on the roadway.

“How would you feel if you’re driving to work and you see one of our signs on the side of the road? And then when you find out that, ohthat impaired driver was caught there at 830 in the morning, hang on, I drive to work at 8:30 a.m, it could very well been me, or maybe that person could very well hit you or caused a crash.”

MADD Lethbridge & Area Chapter organizers reached out to Lethbridge’s city council to get approval or clear any possible legal or zoning hurdles. They didn’t have to do a formal presentation to get their approval. MADD brought it to the attention of the Transportation Department on council’s recommendation. The transportation department was aware of their signs being out there and according to Huchala, transportation “was really really good” about working with them.

They came back and gave MADD some guidelines to follow. For example, if an impaired driver was pulled over in an area where MADD might have a roundabout or at an intersection, they can’t put a sign way to the intersection and will have to go about 10 feet away from that area. MADD also cannot put it on private property so it’s directly in front of a private home or anywhere on their property.

According to Huchala, it will be very thorough process.

“What we do is that we get the information from the Lethbridge City Police. We’re doing it about every two weeks is what we’re gonna try. We’re trying to do a little bit of trial and error on this right now. We are hoping to get information every two weeks from the Lethbridge police as to where they have caught an impaired driver, now whether they get a Criminal Code charge or they get an immediate roadside sanction that information is provided to us and we’ll go out with our volunteers and do those areas where we put some signs,” explains Huchala.

“We are only going to put our signs out for about 24 hours though only because we anticipate people are gonna steal them. They’re quite expensive for us to be doing them so we’re kind of hoping that we can keep track of them fairly easy if we just put them out for 24 hours. But it’s not that we don’t want people to be aware that this happened in their neighborhood. So the idea that we decided to do was MADD Saskatoon had started an interactive map with their signs. And we’re just trying to figure out all the kinks with ours. But the idea is if you see a sign on a roadway, you can go to our website, look up on our map as to where that sign was located. And we’ll have a brief little description as to what happened. So for example, it was an immediate roadside sanction, there was a failure to provide a breath sample, it was on March 7 and we were eventually hoping to have tines open just to show that impaired driving happens at any time of the day or night. They also the age and sex of the driver… Nobody’s picture, there’s no names of people. There’s no pictures of vehicle or anything like that. It’s just you know that yes, somebody was caught in this area. We’re also trying to bring awareness to our campaign 911.”

The goal is to work out all the kinks in Lethbridge, but Huchala says the goal is to to implement it in Coaldale and Taber and hopefully to the west of Lethbridge down the road.

Huchala has talked to Crawford and Calgary and Edmonton are working on raising funds in order to help pay for the signs in those urban areas.

Every hour in Canada, an average of 10 criminal code charges or short-term licence suspensions are laid for alcohol or drug-impaired driving.

“The Lethbridge Police Service is committed to ensuring our streets are safe for everyone,” says Acting-Sgt. Brent Paxman of the Traffic Response Unit.

“We appreciate our partners like MADD, who highlight the impact impaired driving can have on our community and the significant risk to public safety they pose, and encourages other drivers to report suspected impaired drivers they might encounter, when safe to do.”

MADD Lethbridge & Area Chapter encourages the public to never drive impaired. plan for a sober ride home – book an Uber, call a cab or designated driving service, take public transit or arrange for a designated driver; never accept a ride from a driver who may be impaired; Call 911 if you see a driver you suspect is impaired.