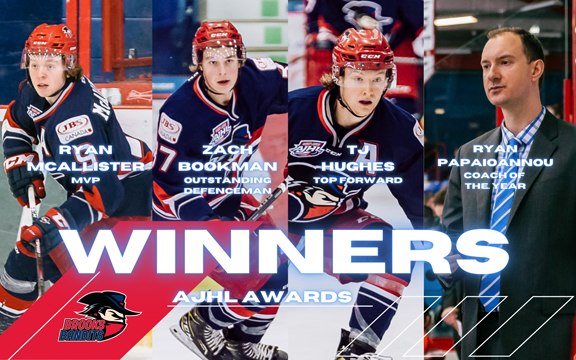 The Alberta Junior Hockey League announced the winners of their 2021-21 Awards, with Brooks winning four of them.

McAllister, who was also the AJHL scoring champion, is the 2021-22 AJHL MVP and recipient of the Alberta Old Time Hockey Players trophy.

With 139 points (57G, 82A), the Western Michigan University commit is the first AJHL player to score over 130 points in a season since the 1997-98 season. McAllister (London, ON) broke the Bandits franchise record for most points in a season and is just the second Bandit to score 50 goals in a season. He averaged 2.3 points per game, recorded 42 multi-point games and completed the season with a 12-game point streak.

TJ Hughes is first recipient of the newly created AJHL Top Forward award after recently earning the AJHL Leading Goal Scorer award.  The award recognizes the player who demonstrates the greatest all-round ability in the position throughout the season. The 20 year-old forward scored a remarkable 66 goals and 127 points as well as a league leading 10 game winning goals in the regular season.

Hughes (Hamilton, ON) is the first AJHL player to reach the 60-goal mark since the 2000-01 season and set a team record for most goals in a season. The third-year Bandit was second overall in the AJHL Scoring Race with 127 points and an average of 2.1 points per game with seven hat tricks.  He will enter the AJHL Record Book with the eighth most goals scored in a single season and third in the category of powerplay goals in a single season with 28.

In November 2021, Hughes was selected as the Alberta Ford Dealers AJHL Player of the Month and the CJHL 2nd Star of the Month as he recorded 30 points in 12 games and extended a 28-game point streak.  He was recognized as the Viterra AJHL Star of the Game 15 times in 2021-22. Hughes was also the recipient of the Brooks Bandits Top Forward award.

NHL Prospect Zach Bookman of the Brooks Bandits has been selected as the Alberta Junior Hockey League’s Outstanding Defenceman and recipient of the W.G. (Bill) Scott Memorial Trophy. The award recognizes the defensive player who demonstrates the greatest all-round ability in the position throughout the season.

Coach of the Year

Papaioannou, 38, has coached his team to a first-place finish for the fifth time, and their fourth 50+ win season, to capture the Dave Duchak Trophy as AJHL Regular Season Champions.  Papaioannou has served as General Manager and Head Coach of the Bandits since 2010 and is a two-time Canadian National Junior A Champion and five-time AJHL champion.

Brooks completed the 2021-22 regular season with a record of 52-6-2 and 106 points.  The Bandits will enter the AJHL Record Book tied for third in the category of most wins (52), tied for sixth overall for fewest losses (6) and tied for fourth in the category of most points (106).  Brooks led the AJHL with 371 goals for, placing them second in the League Record Book behind the 1972-73 Calgary Canucks.

As regular season champions, the Brooks Bandits have earned a round one bye in the 2022 Inter Pipeline AJHL Playoffs and will host their first games on March 18th & 19th as the top seed.

All award winners are determined through three stages of voting by the General Managers and Coaches of the Alberta Junior Hockey League.  The following League Awards and Scholarships will be announced throughout the 2022 Inter Pipeline AJHL Playoffs.