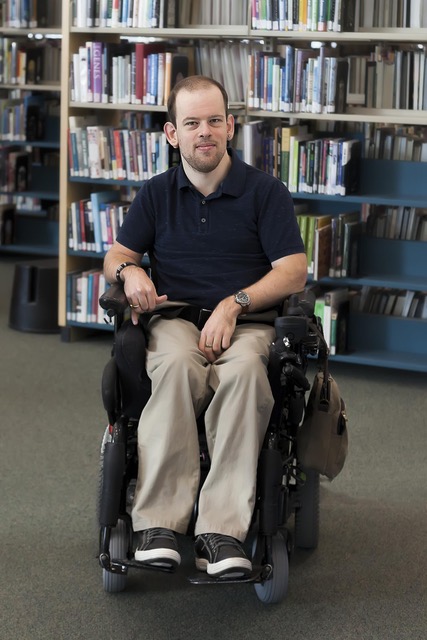 Social worker, podcast host, and lifelong wheelchair user, the Psynergy Centre’s own Trenton Akers seeks to help individuals find harmony between the different facets of themselves.

From an early age, Akers always wanted to be a counsellor. While he originally was drawn to psychology, Akers said he found himself drifting during his second year until a professor advised him to consider pursuing the social work program.

“Just having that innocence and sort of that sense of adventure, I thought, yes. I was able to work with her, and they would allow me of course, to move back to Medicine Hat at the time, and to really come back home and to have a program that was at the time like really ideally set up. It allowed me sort of the ability and the flexibility to also deal with everything that kind of comes along with my disability,” said Akers.

He refers to social work as a “Swiss army knife” in terms of disciplines, as it can allow for work in a wide variety of fields and often comes from a very broad perspective, which is part of why he finds himself well suited to working with the other practitioners at the Psynergy Centre in Medicine Hat

“[Social workers] really see how individuals sort of operate within these various systems and how we can support them within these various fields and within their various needs,” said Akers. “And I really do find that the Psynergy Centre carries that ethos forward because even though I’m working in mental health capacity, we really because we have so many different practitioners that come at things from a wide variety of angles. We’re not just looking at it from the base medical model, but rather we’re looking at it in terms of when the client comes in and how we can best serve their needs with our various functions.”

Akers was introduced to Ana Schlosser and the Psynergy Centre through the podcast, Humanizing Mental Health, he hosts with fellow member Jeremy Alcorn during the recording of an episode on the use of psychedelics in mental health care. Alcorn had already known and been working with Schlosser, and the pair approached Akers to join the team.

“It’s kind of like having a group harbour like we all have our own individual ships, and we all kind of come together for our own common ideals and we have a shared value system,” said Akers.

Akers’ theoretical base model is known as Internal Family Systems (IFS), which takes a look at the various parts of a person, and recognizes they may be in conflict, not unlike how an individual could be in conflict with their external family.

At its core, IFS is the idea that a person has their embodied brain and the neural connections that are created between other individuals like yourself through conversation, or through relationships. In addition, they also have connections to the wider world, like their environment and how all of these three elements work together and sort of create understanding of self and connection with internal family systems, said Akers.

“It’s sort of the idea that, if you’ve ever watched Bugs Bunny cartoons like where you’ll have like the angel and the devil on the shoulder, it’s basically when we come out and we go, we have various different parts of ourselves that are created and developed over time and that while we have a consistent sense of cell it’s just that those elements can be activated by different parts,” said Akers. “What it really is with my clients is working to recognize what those parts are, how they can work together in concert with each other, sort of as an internal family bringing things into balance.”

If there are certain states that are exiles or that are out of balance, or that may have been useful at one time, but now, their way of relating or way of reacting has now become maladaptive, said Akers, a lot of that can come through various interactions with trauma.

“It’s about recognizing those parts. Getting an understanding of what they deal within your internal family system and helping them recognize what’s going on, because with a lot of trauma, even though we may be aware that this may have happened 5, 10 or 20 years ago, for that part of us is still locked in that moment,” said Akers. “So it’s about recognizing what that part is. Helping it to, to recognize what’s going on at the time, how you grow, how you’ve changed, honouring it, for what has done, how it has helped us get through something, and then also asking it and working with to help it find a new job or a different job or a different role.”

“A client that I was working with a while ago, and he was, he’s a nursing student, and I asked him I said how if he was his own patient, how would that nursing part of himself care for him? And like having that recognition, and being able to draw on those own internal strengths from that and over, being able to externalize those things, for a lot of people can be quite helpful,” said Akers.

Akers also works with what he referred to as Ego State Therapy, which he describes as a sort of internal conference table.

“It’s not unlike running your own company or your own baseball team. Think about who you are, what are your internal strengths, have them come into the room. What does that look like, how do they sound and think about lining them up,” said Akers.

“How would you use those internal strengths to deal with aspects of yourself, maybe when they get out of control or when you’re going into a different environment,” said Akers. “How are you going to use your professional stats, or maybe the funny aspect of yourself. So when you’re going into a situation, even though you may be alone, you can still draw on who you are, and have your own internal team to back you up.”

Some clients have trouble with this creative approach, notes Akers, but honouring these thoughts and traits for what they are and the reasons behind them instead of labelling them as “stinking thinking” can be helpful to many people.

Akers doesn’t believe in the notion that being negative is inherently bad, and that it can be better to acknowledge the thoughts for what they are and find a way to move forward.

“Mental health is not the absence of illness, but the continuation of wellness. Sometimes, we’ll be in the red in terms of our mental health, but that doesn’t mean that we can’t reach out to our internal or external resources and help push us forward and it’s not always going to be easy for everyone all the time,” said Akers. “Sometimes the best thing that you can do, especially if somebody has been depressed, it’s just if you’re able to do one thing for yourself, get out of bed, have a shower, that should be something that should be celebrated because one step forward, or even wanting to make the step forward, that still that that means that there is progress that can be made.”