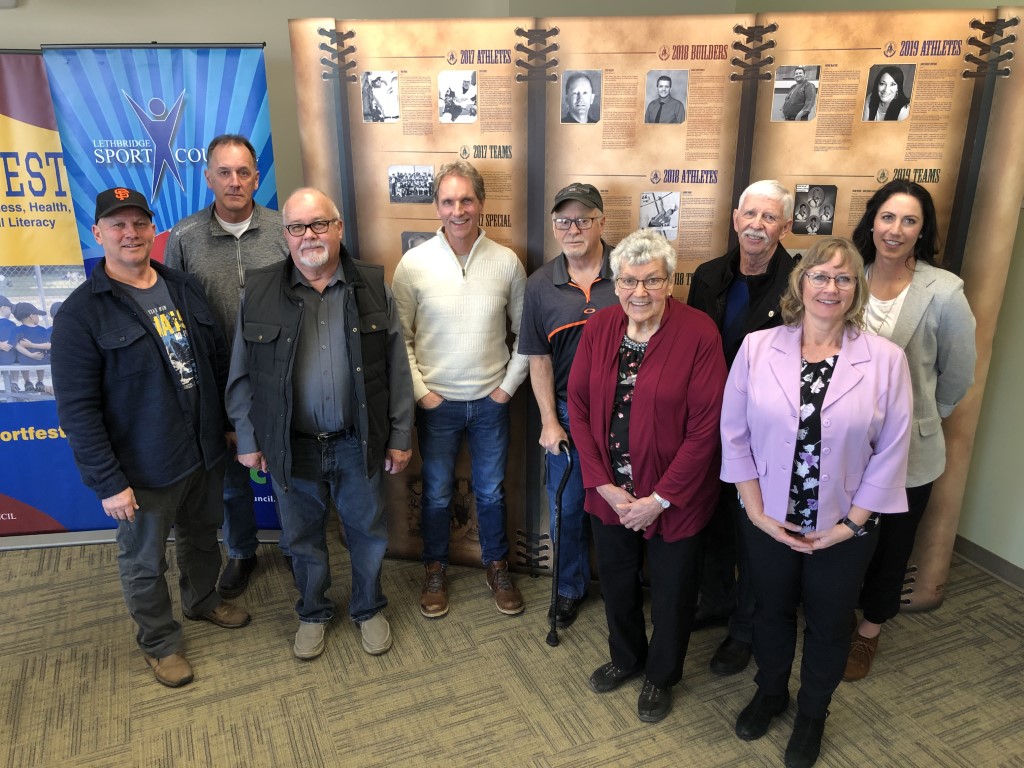 • Members of the 2020 Lethbridge Sports Hall of Fame induction class. (Photo taken in February 2020, prior to the COVID-19 pandemic)
Recent Posts
Recent Comments

The last two years have been filled with cancelled plans, false starts and the best of intentions being upended by the ongoing pandemic. But, with renewed optimism, the Lethbridge Sports Hall of Fame is ready to make up for lost time in 2022.

Having not held an induction ceremony since 2019, the Lethbridge Sports Hall of Fame will hold two induction ceremonies this year. The first will honour the class which was elected to the Hall in 2020 and will be held on May 6 in the ENMAX Centre’s Canadian Western Bank Lounge. The second induction will be held in the fall and will honour the class of 2022, which will be selected later this year. The Hall did not select a 2021 induction class.

“We thank our 2020 inductees, our supporters and all southern Albertans for their patience these past two years,” says Dave McMurray, chair, Lethbridge Sports Hall of Fame. “We are thrilled that we are in a position where we will be able to gather once more and shine a spotlight on the accomplishments of many remarkable athletes, teams and builders who have contributed to Lethbridge’s important sporting history.”

Kinsmen Sports Persons of the Year

The Kinsmen Sports Persons of the Year awards acknowledge individuals for outstanding performance or participation in sports while representing Lethbridge. The 2021 male recipient is former Lethbridge Hurricanes and Team Canada hockey star Dylan Cozens, while the female award is shared by a pair of post-secondary stars – University of Lethbridge rugby standout Hailey Driscoll and Lethbridge College soccer all-star Christine Moser.

A first-round NHL draft pick, Cozens played three full seasons with the Hurricanes and completed his Western Hockey League (WHL) career as one of the most dominant players in franchise history. In his final season with the Hurricanes in 2019-20, he piled up 38 goals and 85 points in just 51 games prior to the season coming to a premature end due to the COVID-19 pandemic. At the time of the season stoppage, Cozens sat seventh in the WHL scoring race and had the third-best points-per-game in the league. He also represented Canada at the 2021 World Junior Hockey Championships, where he was a co-captain for Team Canada, was named to the tournament all-star team and helped his team to a silver medal.

In 2020, Driscoll was named the Pronghorns Female Athlete of the Year after leading the club at both ends of the pitch. She led the Pronghorns with a combined 15 tries between 15’s and 7’s competition and was often tasked with shutting down opposing teams fastest players on defense because of her elite fitness and relentless work ethic. The Pronghorns described Driscoll as “one of the most prolific try scorers in Pronghorn history.” She earned an armful of accolades in her final season as a Pronghorn, including being named a Canada West All-Star and U SPORTS Second Team All-Canadian, as well as an Academic All-Canadian.

Moser was named the Kodiaks Tim Tollestrup Leadership Female Student-Athlete of the Year in 2020 after a campaign which brought both team and individual success. Moser helped the Kodiaks to a first-place finish in the ACAC south division for the first time in 24 years. She continued to push the Kodiaks forward in the playoffs, as the team lost the conference semifinal in overtime, but rebounded for a second straight ACAC bronze medal, with a 1-0 win over the SAIT Trojans. Individually, Moser scored five goals and three assists during the regular season and was named both the ACAC south division player of the year and a CCAA All-Canadian, while also earning Academic All-Canadian and National Scholar accolades.

The Lethbridge Sports Hall of Fame has inducted more than 320 members since its formation in 1985 as part of the City of Lethbridge’s Centennial celebrations. More information and nomination packages are available at lethbridgesportshalloffame.ca.