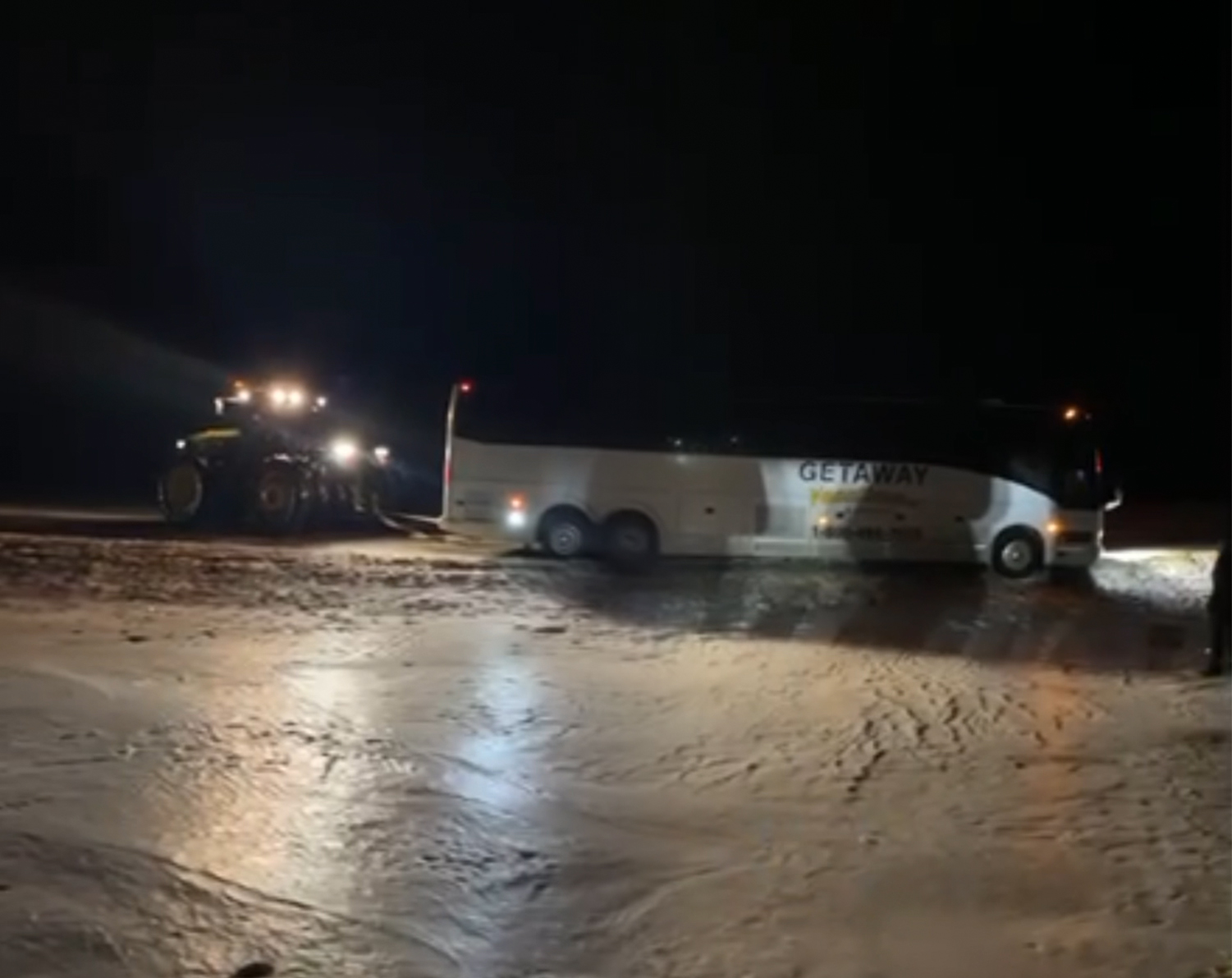 The Kodiaks men’s volleyball team got a first-hand look at small town generosity last month when their bus became stranded in rural Saskatchewan.

The team was on its way to Caronport Jan. 20 for a weekend series against Briercrest College. While road conditions were favourable early in the trip, freezing rain was causing serious issues east of Maple Creek.

“We took it super slow, but we probably passed 40 vehicles in the ditch,” says head coach Greg Gibos. “Then we came across a jackknifed semi and waited about 45 minutes before we could keep moving.”

Less than half an hour later, the Kodiaks found themselves at another standstill. A semi had jackknifed at the bottom of a hill near Webb. At that point, they decided to stay put until the slow-moving traffic ahead of them had cleared.

The team waited on the idling bus for just over an hour before attempting the rest of the trip.

Once in gear though, the tires spun and the front end of the bus slowly slid to the shoulder where it cemented into a snowbank – stopping just short of the ditch.

“We walked up to where the tow truck was working on the semi, and the tow truck had actually broken down and was waiting for a tow of its own,” says Gibos. “It was already past 11 p.m. and we knew it would likely be hours before anyone could help us.”

Given the situation, it would seem a night on the bus was inevitable. But, as luck would have it, in the nearby village of roughly 50 people, the Kodiaks had a connection. Their outside hitter, Clay Thierman, grew up in Webb.

“Once I found out the tow truck was busted, I immediately called my friend Dave DeMars and asked if he could help us out,” says Thierman. “Dave agreed without question and within ten minutes he was on scene with a four-wheel drive tractor and a few other friends – Steve Jensen, Quinn Jensen and Jace Jans.”

Thanks to the efforts of Thierman and his friends, the Kodiaks made it to Swift Current just before 1 a.m. They spent the remainder of the night in a hotel before traveling the rest of the way to Caronport.

The Kodiaks would go on to split their weekend series at Briercrest, with a 3-1 win on Friday and a 3-2 loss on Saturday – a match that ended up being delayed five hours after a vehicle hit a power pole outside the gym. That hiccup meant another night in a hotel.

Despite the challenges of the trip, Gibos says he’s thankful for the outcome, noting it could have been much more serious. “When we slid toward the ditch there was a brief moment of panic, wondering if we would slide down further or even tip,” he says. “And we were lucky the women’s team wasn’t traveling to Caronport that night too. They were supposed to be on a separate bus but their series with Briercrest was postponed due to COVID.”

It was no doubt a memorable night for all involved, including the DeMars family who will be sporting some new Kodiaks gear around Webb – a token of appreciation from Gibos and the team.

A short video of the tractor pulling the bus out of the snowbank can be found at the link below.