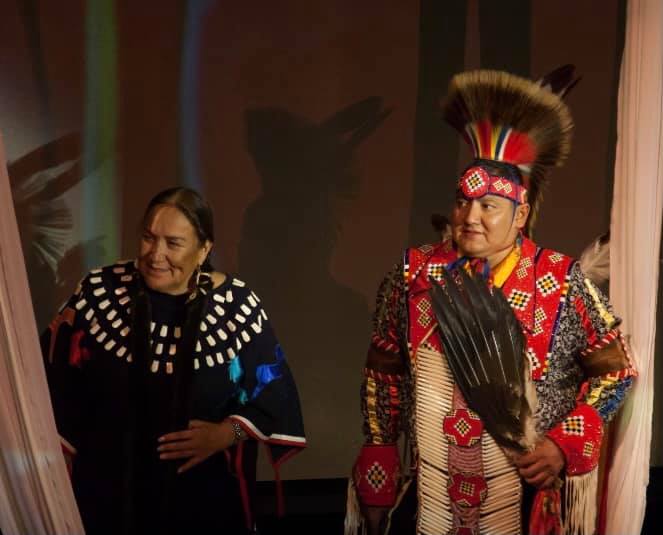 After six years, Rosebud Theatre has a story of Blackfoot history and tradition.

New Blood is a theatrical experience coming to Rosebud for March 18th–20th. It originally created by Deanne Bertsch, who first conceived the idea while visiting Writing-on-Stone in 2014.

“There was a Blackfoot interpreter, and she told us that many of the stories of the writings had been lost. In the late 1800s, when the Blackfoot people were put on reserves down there, they weren’t allowed to go back to the writings that were on the sides of the cliffs because it had all become private land, bought up by settlers,” said Bertsch. “And so many of the stories hadn’t been passed down for 60-some years until people finally were allowed back on there. I just was really, really shocked at that and moved by it because I work with a lot of Blackfoot students at Strathmore High School.”

At the time, she connected her dance class which primarily consisted of non-First Nations students, with the Blackfoot language class at the school. The teacher of this class spoke at length about the points in history that had changed the traditional way of life for the Blackfoot, as well as her own personal experiences with residential schools and issues that stemmed from that experience in her community.

“She talked about how there’s such a movement to the traditional way of life, into discovering all of the different stories and the way things used to be done and so we tried to incorporate all that history into our show,” said Bertsch.”The really funny thing is, I didn’t really know where to start except a friend of mine from Rosebud, Her name is Kelsey Krogman, she had given me a CD of Peter Gabriel’s music called New Blood. And when I listened to it, and she said to me, she said, “You should do a dance show to this music.”

The music is used alongside true stories and poems, narrated by Blackfoot students and actors. The piece was first performed in November of 2014, and has had 12 different casts over the course of its life, including a showing on Rosebud’s Studio Stage.

“It’s just been an incredible journey of reconciliation and learning about Canada’s history, learning about Blackfoot history and relationship building. It’s not just Blackfoot students that are involved. There are also lots of different first nations represented, but building relationships between First Nations people and non-First Nations people and huge awareness for all the audiences that we bring it to. I think healing as well,” said Bertsch.

With the return to Rosebud Theatre, Bertsch notes that it’s a great opportunity for the theatre to build a relationship with the neighbouring Siksika Nation, and hopes the show will be well-attended.

This sentiment is shared by actress and Grade 12 student Nikko-li Hunt, who is one of the main Blackfoot storytellers in the current New Blood cast, and has been working on her role since the early part of 2021.

“It’s been really awesome. Because it’s connected me to a lot of my classmates and a lot of people in general,” said Hunt.

“It’s just, when we perform the show, we get to see kind of an understanding grow to the audience, because a lot of people don’t know the story of residential school. And sometimes people just tell like, native people to get over it. And it’s not really something that’s that easy to do. And then people get to see the full story or part of the story. And it helps the understanding to grow and connect people and break that barrier that I’ve seen exist.”

The role also helped her better understand what her own grandmother and other older people around her experienced in residential schools, said Hunt.

“For me, it’s about making sure that I’m being as sincere as I can be, because that’s my goal. I’m not there to just perform, I’m there to share a story and to connect people,” said Hunt.