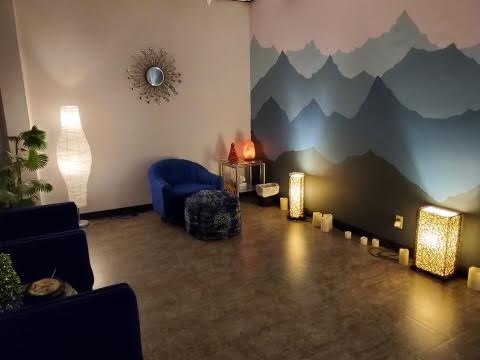 From the moment the doors of the Psynergy Centre open, it’s immediately apparent this will not be like other mental health practitioner’s offices. In October of 2021, six registered practitioners came together, alongside several community collaborators, with the philosophy that “you are your own healer,” and a desire to see something new available for those looking for help with their mental health.

“It came out of the last couple years..  just really seeing the mental health crisis here in Medicine Hat. You hear about it all over,” explained Ana Schlosser, a Registered Provisional Psychologist and member of the Psynergy Centre Health & Wellness. “Being here in Medicine Hat and seeing the impact of kind of this perfect collision of so many different things: the pandemic, and mental health and addictions and all of those pieces kind of coming together all at once, and the impact that that had on our community, as well as the ongoing impact that I can see as a mental health provider, what I’ve been able to kind of sit back and try to look at the bigger picture of how the systems are working or not working and what what kinds of practitioners are trying to manage a lot of the specialized care in the community. It’s really required everybody to work together, because community mental health is very tapped out because of the free services and some of the reduced services with the non-profits, but also having to have addiction specialists on board and having to have trauma specialists on board and all of those pieces, but what I really realized was that, as hard as we’re working, it’s not always working. There’s just a different need for healing in the context of community. We’re always working one on one and individual therapy or something like that, right? So this idea was sort of born out of what we’re doing one-on-one is not effective anymore, or not as effective, I guess, for many people.”

The Psynergy Centre takes a communal approach to many of their services, and offers alternative healing methods in the same building as they do more traditional therapy services. This can allow for a shift away from what Schlosser admits can be a very solution-based setting where “you have to be sick to get help,” and instead address some of the bigger picture issues such as intergenerational trauma.

“Community building is a huge portion of what we do, as well as collaboration with other kinds of practitioners (such as) yoga practitioners, as well as other kinds of body workers, massage therapists, acupuncturists and Reiki Masters, which is a form of energy healing, which traditionally is a little bit too alternative for the science realm of traditional therapy,” said Schlosser. “But we’re seeing more and more, particularly as trauma therapies continue to evolve, they tend to incorporate a lot of those alternative healing methods breathwork and movement, whether it’s dance or music, like drumming. And so really, I feel like the acceptance of some of these alternative therapies have come from the ongoing progression of trauma therapies that have created some more space for them.”

“Our approach sort of allows people to explore some other ways of understanding their pain, whether it’s physical or emotional, or both. But also then supports them to explore that safely, because perhaps they trust their therapist. So their therapist suggests to try yoga or to try Reiki or something, then they’re not having to discover that necessarily on their own, they’re still being supported in that journey. So I often will have people in addition to their individual therapy, or we’ll take a break from individual therapy, and they’ll go try other modalities. And to just supplement what they’re doing right, giving them more tools.”

Schlosser notes that many clients have been more open to trying these other methods of healing due to them being in the same building, and this communal approach has made those who come in looking for a specific person much more comfortable seeing another practitioner in the event that the person they were seeking out is unavailable.

“It’s different from sort of cold calling, you know, different therapists in town who kind of work from different perspectives and different specialties, whereas everybody here has a different specialty, but they have the same mentality around healing,” said Schlosser.

There are even group consultations at the centre, allowing for an individual to hear several different opinions on how to move forward at once for a single rate instead of reaching out to six different offices and paying for six separate consultations.

This approach to care at the Psynergy Centre even extends to the space itself, which Schlosser calls the selection of “very intentional.”

Many parts of mental health care, including the psychedelic work that Schlosser herself practices, rely on setting as a vital part of the journey, and that shows in the atmosphere surrounding the centre.

“The minute we walked into this space, we could just feel it, you could just feel the space felt different than any other space we’ve looked at or been in,” said Schlosser. “And so it backs up against the South Saskatchewan River. You can see the bridges on each side of us, the Finley Bridge, and then the other bridge down the TransCanada and it’s just beautiful. There’s so much nature here. The concept of a river to Indigenous peoples is very powerful. And so for us, and so much of the work that we’re doing is about principles that Indigenous people have known for centuries and millennia. We are just as Westerners shifting more into that area of understanding things, but for us having this feeling that you’re in nature, and you see trees and you see animals, you know deer and birds. Right now, I’m watching these geese fly over the river and the water is frozen on one side, but it’s flowing on the other side. It’s just really, really symbolic to the work that one’s doing when they’re healing.”

“When people walk into our office, I love hearing it, and I’m not even humble about it. When they, when they walk in, they’re like, ‘Wow, this is a really nice space,’ I’m like, ‘yep, we have worked hard to make the space conducive to transformational work.’ It does not feel clinical, you almost feel like you’re walking into someone’s home, you know, so you sort of see personalities through the decor of each individual therapist’s and clinician’s office, but also within the general spaces. It’s very relaxed, it’s very ambient, we play meditation type music, we have low lighting, we have lots and lots of live plants, so it does not feel medical at all and that was very intentional,” explained Schlosser.

Alongside their unique take on healing and the availability of different connections to communities for people of colour, indigenous people, and members of the LGBTQ community, play is an integral part of this atmosphere, said Schlosser. Laughter can often be heard in the waiting room, adding to the relaxing experience that is the basis for transformational work.

“It’s a place of healing, but healing comes in many, many forms. It doesn’t have to be a traumatic experience to heal from trauma,” said Schlosser.