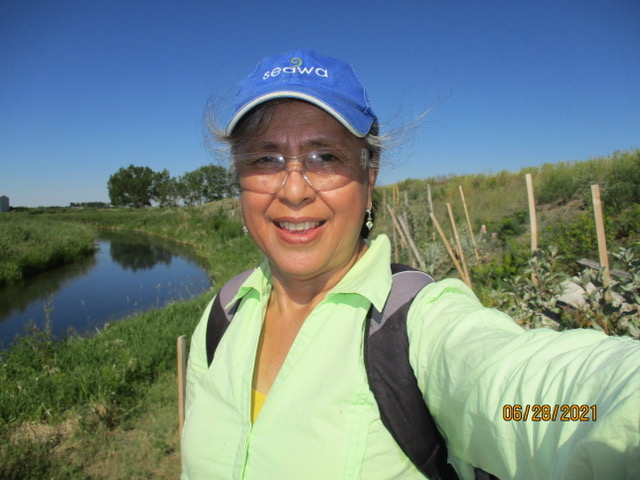 The South Eastern Alberta Watershed Alliance has been hard at work searching for the key to saving precious riparian land, and this year they believe they’re close enough to share what they’ve discovered.

As of the end of 2021, SEAWA has restored 11 kilometers of land in the riparian areas, or the piece of land that runs alongside waterways, in Southeastern Alberta. This restoration also comes with other 11,000 native shrubs and trees that have successfully survived after being planted.

“We emphasize native because these are the ones that should be planted to maintain our native ecosystem here in southeastern Alberta,” said Marilou Montemayor, Executive Director of SEAWA. “Riparian restoration doesn’t have a cookie cutter recipe. So it is very site specific. And our conditions here, you never find like, Okay, here’s how to do it. So we learn as we go. And now, after four seasons, we are ready to prepare our client guide to riparian restoration in southeastern Alberta, or the SEAWA watershed.”

With this information now in hand, SEAWA is moving forward with a call to action for landowners and the interested public to help conserve healthy riparian areas.

“Once you destroy riparian areas it is very, very difficult to restore as per our experience. And so the second call to action then, is that degraded riparian areas have to restore them. And then we encountered invasive plants on riparian areas. This was not actually our original plan, but then once you’re on site, you actually are faced with real problems,” said Montemayor. “So our third call for action is the control of invasive weeds.”

Montemayor named both the Russian olive tree and leafy spurge as particular weeds to focus on due to their potential for damage and competition with native plant-life in these vulnerable areas. These three calls to action were part of a larger education and outreach work, which make up much of the rest of SEAWA’s yearly efforts.

“As part of our education and outreach we conducted educational tours and several events around riparian areas and also held lectures about riparian areas, riparian restoration and control of invasive weeds,” said Montemayor. “From our riparian restoration experience, we are going to have a compilation of knowledge. And we also have the results of our experiments on invasive species control, invasive plants control and these forms our kind of knowledge and they have become the basis of our educational programs and activities. And from these educational programs, we have motivated people and created awareness, and they now actually would like to participate in SEAWA’s activities as well as SEAWA’s committees or the Board.”

The creation and population of the new SEAWA website was also an achievement of the year, said Montemayor.

Looking forward, the organization plans to focus on the compilation of their knowledge and creation of further educational materials, but that hasn’t stopped them from taking on some new projects, as well.

“We were successful in getting some money to do a small project, which is a planning project or just information gathering. It is called Drinking Water Source Area Characterization for the city of Medicine Hat and the town of Redcliffe,” said Montemayor. “So if you’re aware that our drinking water comes from the South Saskatchewan River. So this project will look at the risks and hazards that are or potentially are affecting our water quality from where our drinking water comes from. We’re going to be studying and we’re going to look at many sources of risks and hazards, then we’ll compile that into a report. Now this source area characterization is just one component of what we will eventually prepare, which is called the Source Water Protection Plan.”

In addition to this, Montemayor said that they are looking towards the planting of around 1,000 trees, as part of the federal government’s program for the planting of two billion trees.

“So what we did is that some sister organizations including SEAWA, and other organizations, about 13 organizations we grouped together and would be submitting an application together under the two billion trees program, and for SEAWA we have applied for 1000 trees to be planted in season 2023. Okay, so we’re at that stage, more or less, are now organized and hope that we can do this together,” said Montemayor.