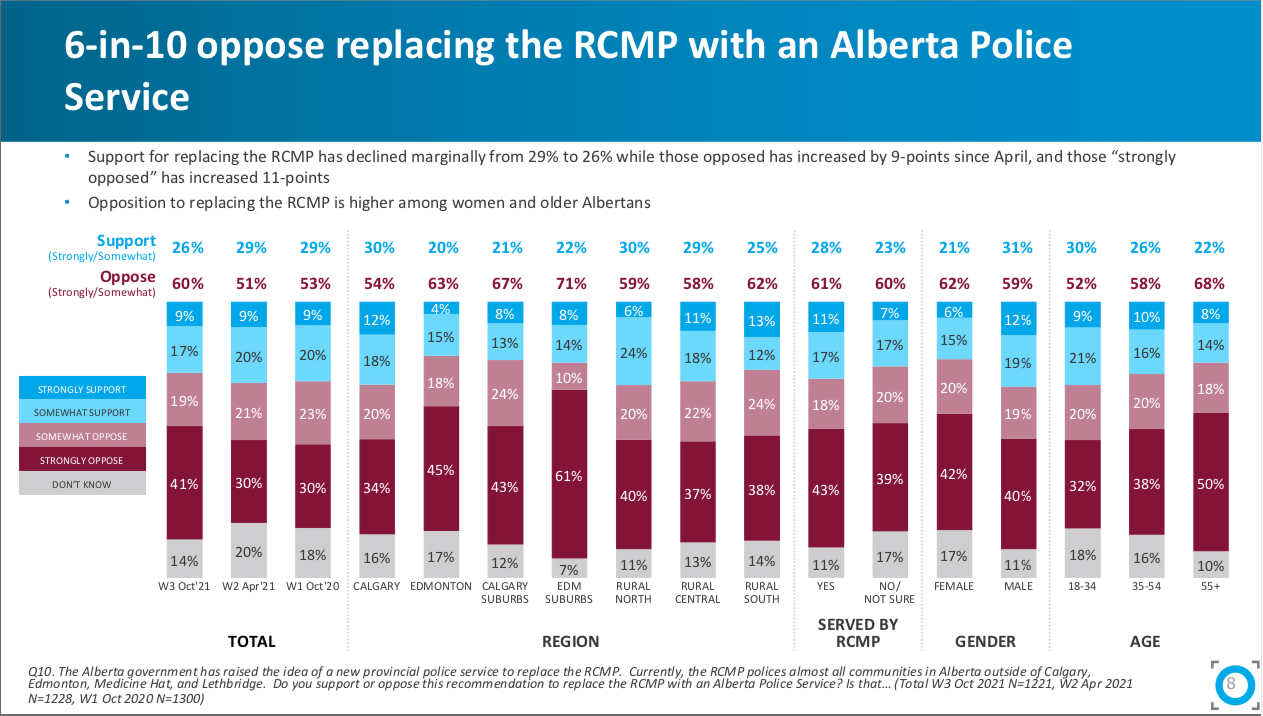 Overall, the 80 per cent amongst those Albertans surveyed that the RCMP are satisfied.

Interestingly enough, the lowest support for the RCMP were those from Southern Alberta as 71 per cent indicated they were satisfied with the RCMP services.

Kevin Halwa, Director, Prairies/North Region of the National Police Federation, the union which represents members of the RCMP was incredulous the Alberta Provincial government was considering a provincial police force. At the same time, he was not surprised at the results of the survey.

“I was not at all surprised, I have done all my service in Alberta which will be just rounding near the 25 year mark (as of late December), I spent my whole life in Alberta, as many of the members that I’ve worked with over the years and they have come to appreciate the support the communities towards the Mounties,” explained Halwa in a telephone interview. “Our members have joined the RCMP from four corners of the globes and many of those that who get posed to Alberta man Alberta their home and so as a result, not surprisingly we have great support in Alberta on top of the fact that they do a great job so though I wasn’t surprised at all, by the by the level of support from four corners of the province.”

In a prepared statement, the president of the National Police Federation was not surprised either the 70 per cent respondents were opposed to replacing the RCMP.

“Albertans couldn’t be less interested in this proposal, despite repeated attempts by Premier Kenney and others to make a case for a smaller, prohibitively costly and untested provincial police service,” said Brian Sauvé, President of the National Police Federation. “Even more importantly, now that the APPS Transition Study has finally been released confirming that a new provincial police service will cost Alberta taxpayers about $550 million more for about half as many fully-trained police officers, support for this will undoubtedly slip even lower.

““The NPF very recently attended the Alberta Municipalities’, and Rural Municipalities Association’s conferences where we spoke with literally hundreds of municipal leaders and engaged residents. Not a single person, even those in non-RCMP served communities, supported this transition. All wanted to keep the RCMP, providing further confirmation that this Government is simply not listening to residents or their elected representatives.”

According to a third party report from PricewaterhouseCoopers results released in October stated that it costs Alberta about $500 a year for the RCMP. As part of a long-standing, cost-share agreement, the federal government gives the Province $170 million.

The PricewaterhouseCoopers report says the Alberta government would have to pay $366 million in start-up costs and then subsequently $735 million each year.

““We start looking at the dollars involved, I am not surprised people want to know more about their decisions being made, it’s their money,” states Halwa. “Albertans typically don’t spend money foolishly so to spend more to get less police officers, less fully-trained police officers on the road just doesn’t make any sense. We’ve been talking to people over the volunteer since last January. Time and time again people from Alberta are asking ‘Why is anybody thinking about this?’ I don’t really have a good answer for them.”

One of the improvements those in rural Alberta have is they would like to see improved rural response time the RCMP has answering complaints. Halwa acknowledges the RCMP rural town hall meetings often have residents saying they would like improved response time to complaints. He said that is all on the Alberta government. If there were more RCMP officers in the the rural areas, there would be less of a problem for rural residents as there would be more officers to address those in the more remote areas.

Besides the costs, Halwa points to the fact the involvement in the community the RCMP Members have there. He points to the enthusiasm and the involfative ways a detachment like Brooks does as far as community relations and public education for a culturally diverse community.

“Brooks is a great example of detachment getting involved in the community. The one corporal there does a bunch of TikTok videos and a bunch of things like that and on top of the social media stuff, just the groups they get involved with there and the involvement of the members in the community there is just spectacular,” explains Halwa. “And it’s not only Brooks, it’s happening all over the place.”

Those wanting to look at the survey results can check out https://npf-fpn.com/news-item/majority-of-albertans-give-proposed-apps-the-cold-shoulder-support-for-rcmp-remains-strong/