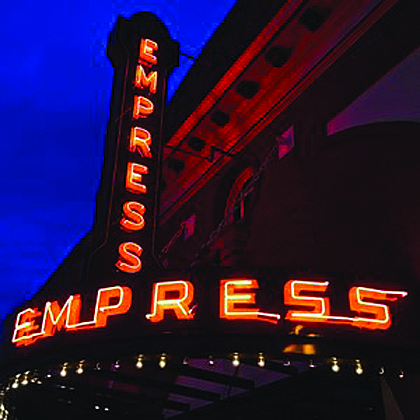 Main street will be the site of a street festival starting at 6:30 p.m. for ticket holders. (The tickets sold out in 45 minutes for this event.)

Ghostbuster fan clubs from Calgary and Edmonton are setting up displays of Ghostbuster vehicles and paraphernalia. Some merchandise will be available for sale.  The BC Delorean Ecto-1 will also be making a special appearance at The Empress Theatre on this evening. https://youtu.be/qwQR42jkajk

The public are invited to join the party at 8 p.m. on Main Street, Fort Macleod. Hot chocolate, s’mores (for the first 100).

Selfies are encouraged with props, the Stay Puft Marshmallow Man (weather permitting) and Slimer.  A photographer will be on site to do photos of people ‘blasting’ The Empress Theatre for $5.

A special brew has been developed for this event.  Fort Macleod’s Stronghold Brewing Company, as an ode to Slimer, has developed the Proton Pak, a very green light beer loaded with pink guava and bursting with tropical flavour.  This will be served in the VIP tent for ticket holders, as well as to the public in the brewery after 8 p.m..

Shaun Johnston, who plays Jack Bartlett on the CBC drama Heartland will be here for the Special Screening.

It seems only proper that Ghostbusters: Afterlife make its first showing in Canada at The Empress Theatre. The Empress holds ‘the distinction of being Canada’s most haunted theatre.’  https://www.fortmacleodgazette.com/2014/haunted-canada-true-tales-and-eerie-encounters-at-the-empress-theatre-in-fort-macleod/

Ed, the ghost, has spent decades within these walls and played havoc with security systems, lights, ladders and locked doors.  His footsteps and laughter have been heard.  But, all in all, Ed seems to be a fan of the wonderful things that happen within the walls of The Empress Theatre.