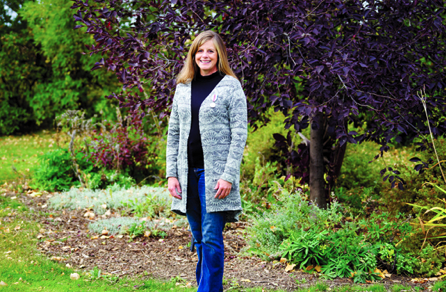 Nichole Neubauer was at the McDougall Centre in Calgary on Thursday to be presented with the Queen Elizabeth II’s Platinum Jubilee Medal (Alberta) by Jason Kenney, his last official duty as premier.

The certificate states, “Nichole Neubauer is the owner of Neubauer Farms and an energetic advocate for agriculture. Since 2005, the Neubauer family has welcomed over 20,000 students to their farm to teach children all about where their food comes from and that agriculture is the fundamental connection to life.”

Neubauer said, “I am extremely humbled and honoured to be presented with the Queen Elizabeth II’s Platinum Jubilee Medal by our 18th Premier of Alberta, Jason Kenney, who also provided the nomination for this prestigious award.”

Neubauer Farms is passionate about teaching kids where their food comes from and about agriculture, which is the fundamental connection to life.

“We have these amazing food production systems in Canada,” stated Neubauer. “We have less then 1% of the population that remains in primary production.”

This leaves a knowledge gap where the average person may not understand the food system, how it works and where food comes from. Neubauer believes she was selected as an advocate of the agricultural industry, and the award recognizes the importance of educating others around the origins of food and how it contributes to the Canadian economy.

About 40 others were presented awards by Kenney at the ceremony.

“Men and women who have made a difference,” said Neubauer. “The medal was created to honour the late Queen Elizabeth and her lifetime she dedicated to public service. Essentially, it’s made to recognize people who are doing good things in their community.

“I was in awe of being in a room of so many amazing leaders who are making things happen in our province.”

Neubauer encourages everyone to find work driven by passion and purpose and which gets them out of bed in the morning.

“It creates meaningful opportunities in their life. I am so blessed to be in a community that allows me to follow my passion, which is educating people about agriculture.”