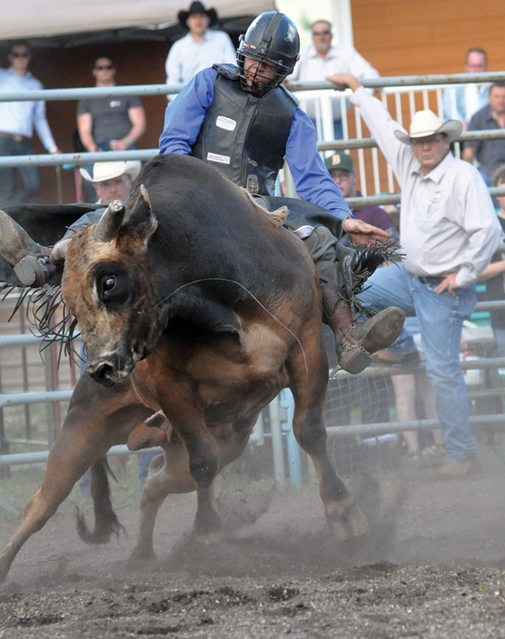 Syd McCurdy contributes to the communities and region. Here at an Oyen Bull-A-Rama, McCurdy was the arena official (background in white shirt and cowboy hat).
Recent Posts
Recent Comments

The Medicine Hat Feeding Company has raised over $10,000 to help longtime employee Syd McCurdy and his family.

Emergency services were called to the McCurdy residence on November 20th, and stroke symptoms were determined to be due to a brain tumor at Medicine Hat Hospital. The GoFundMe Campaign to support the family and cover the costs of being in Calgary, where McCurdy and his family are currently staying, has collected $17,125 raised of $5,000 goal as of December 16th in addition to the money raised by the Medicine Hat Feeding Company.

“We’ve been emailing Kirsten everyday or every other day giving them an updated they’re just overwhelmed with the support people have so generously given to them,” said Lyle Taylor, General Manager of the Medicine Hat Feeding Company. McCurdy has been a part of the company since around 1990, and as well as the former Mayor of Empress, is very well known and respected in the cattle community.

The fundraising is currently moving into its third week, said Taylor, and the generosity of the people around McCurdy has been incredible.

“Everybody’s been so generous, it’s really very overwhelming. So it’s been a very positive experience. Syd and Kirsten are just so thankful,” said Taylor.

McCurdy’s Empress ranch was devastated by the wild fires which occurred in the fall of 2017. McCurdy has been involved in many community organizations and civil government.