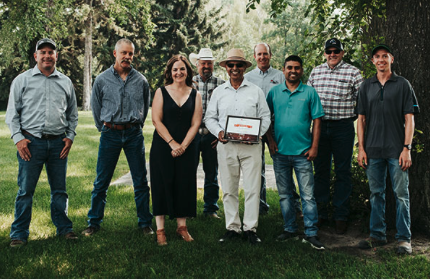 “Dr. Acharya is respected and appreciated by academics and producers alike,” said Matt Bowman, chair of the Beef Cattle Research Council and a producer from Thornloe, Ontario. “His work addresses real industry obstacles with solutions that consider producers’ needs through direct communication with stakeholders.”

Dr. Acharya is a research scientist and forage breeder at Agriculture and Agri-Food Canada (AAFC) in Lethbridge, Alberta, where he specializes in breeding legumes. His current research focuses on developing new cultivars of legume species with improvements in yield, nutritional quality and persistence, among other traits. His unique approach to plant breeding incorporates a consideration of multiple factors to best serve the needs of end-users, including beef producers. Indeed, many of Dr. Acharya’s past cultivars are appreciated for their practical use in solving industry challenges, such as his AC Oxley II and AC Veldt cicer milkvetch varieties, both of which are much quicker to establish than predecessors. Similarly, he assisted in the development of the online Forage U-Pick tool, which aids western Canadian producers in choosing appropriate forage species for their operations.

Dr. Acharya’s most recent project aims to enhance the lipid content of legume vegetative tissues to improve their energy content for grazing livestock. Using conventional and genomic breeding techniques, his team has been able to select for plants with approximately five percent lipid content, compared to virtually none in the original plants. His project will have environmental benefits by using conventional breeding to reduce methane production through increased digestibility, which will allow western Canadian alfalfa producers to export to nations that avoid the GMO designation.

“This project is another example of Dr. Acharya’s commitment to offering practical benefits to industry through consideration of a variety of important factors, making him an exemplary recipient of the Canadian Beef Industry Award for Outstanding Research and Innovation,” Bowman added.

To best address industry needs, Dr. Acharya has actively sought out producer input through attendance at a variety of industry events and by directly asking for feedback through agricultural media. He is actively involved in industry and academic conferences and regularly publishes producer-targeted articles detailing his recent work. He also has offered his time to multiple journals, as president of the International College of Nutrition from 2005 to 2007 and as the current chair of the Alberta Forage Industry Network. As the author of more than 180 scientific manuscripts, five books, eight book chapters, 16 review articles, and contributions to more than 285 other publications, he is an expert at communicating with both producer and scientific communities.

While Dr. Acharya has received much recognition for innovations in forage breeding, perhaps his greatest accomplishment has been developing more than 25 commercially released perennial forage and native grass species. His native grass cultivars are still used in reclamation projects, while his legume varieties have helped producers mitigate bloat risk and solve challenges with salinity and hardiness.

Nominations for the 2022 award must be submitted to the BCRC by May 1, 2022.â€¯ Eligible nominations from previous years will be considered for the 2021 award, which will be presented at the Canadian Beef Industry Conference in August 2022.