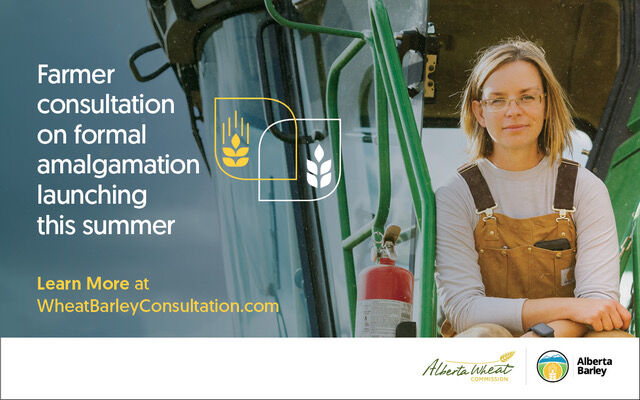 To amalgamate or not: that is the question for wheat and barley growers
Recent Posts
Recent Comments

In July of 2021, the Alberta Wheat and Alberta Barley commissions are launching a consultation with farmers regarding a possible amalgamation to form a single commission.

The boards have had a shared management structure since 2018 and had been sharing office space prior to that, said Tara Sawyer, Alberta Barley Chair.

“We realized it was more efficient and got rid of some of the duplication. We saw savings of over $350,000 annually,” said Sawyer.

“The board’s past motions say let’s go forward with a single management structure for the two Commissions,” said Tom Steve, General Manager of the Alberta Wheat and Barley Commissions. “A year or so later, the motions came from our annual members’ meetings. In the case of the Alberta Wheat Commission, I believe it was the end of January 2019. And then Alberta Barley was December of 2019. And it was to explore the concept of going to the next step.”

The proposed structure of the commission features 12 directors with two from each region, as defined by a map that will closely resemble Alberta Barley’s current regions, said Steve, as well as 24 delegates. All of these positions would be filled by farmers who are members of the combined commission, but nothing is set in stone.

“This isn’t the final decision. This is just a sort of a real early console, or by chance for farmers to, to get involved and be informed,” said Hames.

This consultation is not a formal plebiscite, merely a way to know how the commissions’ members feel regarding the proposed amalgamation. This initial consultation, over an online survey, will last until the end of August 2021.

“After the survey we go to the town hall. We’ll have these Town Hall events, they’ll be virtual, at the end of October with more opportunity for dialogue, then we’ll have the regional meetings,” said Sawyer. “Alberta Barley’s annual general meeting is in December, so that’s when our delegate body will vote based on all that feedback that’s been compiled. The Alberta Wheat Commission’s meeting is in January, so after January we’ll know what both sides say.”

If both sides are in favor of a formal vote, the plebiscite will most likely take place in late March to early April of 2022.

Over the course of the month, members of the commissions are encouraged to take part in the online consultation. The initial survey can be taken at wheatbarleyconsultation.com, where farmers can also get more information as it pertains to the proposed changes.

“We want to gain as much feedback as possible from producers across the province in this online survey,” said Todd Hames, Alberta Wheat Commission Chair. “There’s two reasons we want to engage with our members, not only to get them involved, we want their opinion and we want to make sure they’re informed about this proposed amalgamation. Online is just the cheapest way to reach as many producers as possible and get their feedback.”